The forested heights of Reyes Peak and its accompanying ridge stand high above the rugged terrain of Los Padres National Forest. About 45 minutes north of Ojai, this peak features views encompassing nearly all of Ventura County. Forested slopes, panoramic views on both sides of the ridge, and a memorable summit experience make this hike one of the best in all of Ventura County.
Distance: 9.2 Miles
Elevation Gained: 1400′
Difficulty: Moderately Strenuous
Time: 4:50
Critters: None
Get there likes this.
Details: I’m not absolutely certain whether the National Forest requires an Adventure Pass to park at the trailhead, but it probably would be wise to have one handy.
Details: 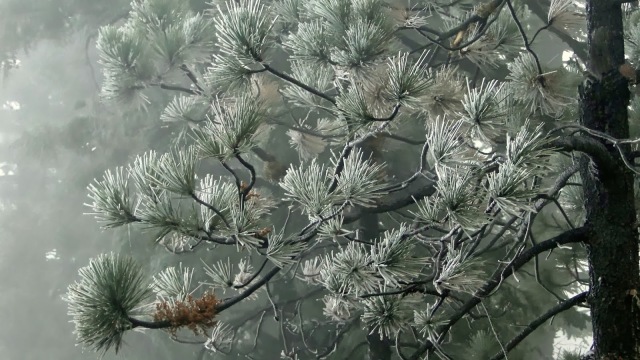 Back in February, my friend Taylor and I climbed Dry Lakes Ridge north of Ojai. While out on that ridge, we spied an even greater ridge, crowned by conifers, to the north. After some research, I learned that this ridge is called Pine Mountain Ridge and that it contained two 7,000’+ summits, Reyes Peak and Haddock Mountain. Intrigued, I read further and found out that it contains one of the few areas supporting mixed-conifer forest in Ventura County as well as stunning views in every direction. 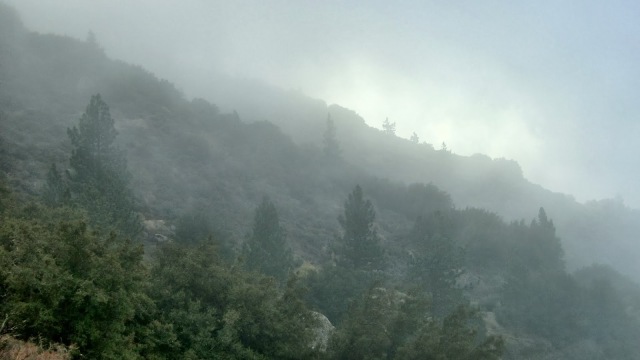 Taylor and I drove out here last June to take a stab at the ridge and both peaks. After nearly two hours of driving from Agoura and Camarillo, we arrived at Pine Mountain Road and found that the road was closed. Thwarted, we resolved to come back another day and walk along the ridge that had tempted us months before.

And back we came on a cold, windy September morning. Had we been a little more prepared for 35 degree temps and wind, we might have been slightly more comfortable. As it was, the cold, the mist, and the rime ice were a welcome site after months of scorching summer weather.

Keeping in the spirit of the misadventure of our first attempt to come here, Taylor and I hit the trail and promptly went the wrong way down a fire road descending from the main trailhead instead of ascending toward the peaks. This turned out to be welcome because we were on the less windy side of the ridge, and we were able to warm our bodies up somewhat after the bone-chilling winds at the trail head.

This three mile spur trail featured gorgeous views looking south toward Ojai and the Channel Islands. While we often couldn’t see due to the fog rolling in and out, this diversion was welcome as it led us to some excellent camping spots to consider for future trips. 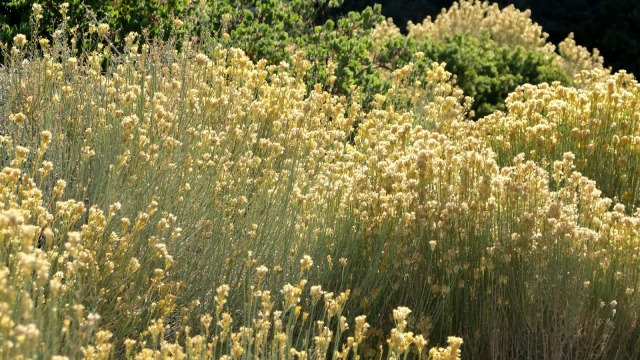 After reaching the end of the trail and realizing that the only way to Reyes Peak would be to scramble up a steep slope through manzanita, we turned back to return to the trail head, where we could take the main trail that travels along the ridge. As we turned back, the sun emerged in force, and it became apparent that it would be a crisp, clear fall day, allowing us endless views.

Back at the main trail head, we turned due east and plunged into a deep and marvelously healthy mixed-conifer forest. I had originally believed we would find only pine trees, and yet all the old friends from the classic mid-to-southern California forests were there: Jeffrey pine, ponderosa pine, white fir, and sugar pine, with a few pinyon pines for good measure.

We pushed hard through the wind and the cold, as we were now on the windward side of the mountain. As the morning wore on, the temps rose slightly and the mist became thinner and less consistent. One second, the forest would be shrouded and damp. In the next, the fog would clear, and the sun would shine through, crisp and warm. 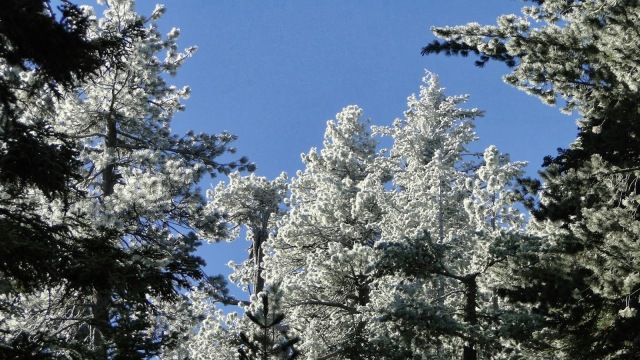 An interesting aspect of this hike came from the sandstone. I can’t recall ever walking amongst conifers where the dominant rock wasn’t some form of granite. After all the hikes in the Sierras, Angeles, San Bernadinos, and even Peninsular Ranges, granite has been to conifer what peanut butter has been to jelly. And yet, here was sandstone tinged orange, red, yellow, gold, and occasionally crusted with green lichen. I don’t know how common this is, but it was welcome and slightly reminiscent of scenes from the southwest.

All along the ridge, the views were stunning. When the fog lifted permanently, we could see the Channel Islands and the Oxnard Plain, along with all of the mountains in-between. To the the north, we could see Mt. Pinos, the Ventura County High Point, along with rolling badlands that eventually give way to the San Joaquin Valley. East to west, the ridge stretched out indefinitely, revealing a tempting region for further exploration. 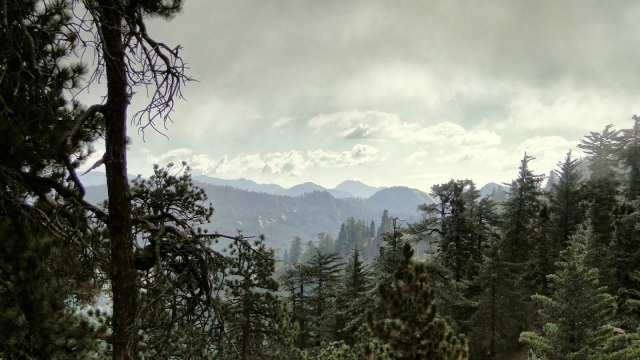 We never made it to Haddock Mountain, which had been part of our goal. We had bypassed Reyes Peak, as it was still socked in. Haddock seemed attainable, but as we were working with a time limit and had burned up over an hour on the first spur trail, Haddock would have to remain unattained on this trip. We stopped at a gap and enjoyed a snack of peanut butter filled pretzels, persimmons, and fruit.

From here, we planned to turn back and skip both of the peaks, as the views and the hike from the ridge were more than satisfying. However, on our way back, I spied a faint unmaintained trail climbing up the east flank of Reyes Peak. We followed along, occasionally having to cut through bushes until we could pick up the faint trail. After 15 minutes of solid climbing, we emerged at the boulder studded summit, where we saw remains of an old fire tower.

We were wise to take the summit trail, as Reyes Peak has even better views in all directions than what we could find on the ridge. The ridge offers peaks between trees, but the summit is pretty clear, save for a secondary peak just to the north. The air remained phenomenally clear, and we enjoyed the vertiginous, rocky heights for a solid 20 minutes before heading down the windy path to the trail head.

This is an amazing trail in a stunning area. It may be one of my favorite hikes all year, and I cannot wait to come back here and explore some more while camping in some of the sites overlooking the mountains below. If you don’t mind a long drive through remote regions, I highly recommend this hike to anybody who likes the higher elevations.