Paramount Ranch is most famous for being the site of numerous film productions from the 30’s up until recent years. Located within this modest protected habitat is an old “western town” set, most recently used for Dr. Quinn, Medicine Woman. Beyond the buildings, the ranch features acres of rolling hills, towering valley oaks, and wide-open grasslands.

I came back home for a couple of days to visit with family and friends. I new I would have the days mostly to myself, and naturally I set out to take some hikes. I was craving some of the old familiar, which consists of rolling, grassy hills and towering valley oaks. The two best places to find this are Cheeseboro/Palo Comado Canyons and Malibu Creek State Park. However, in keeping with my desire to try as many new hikes as possible, I opted for a third, more modest option in Paramount Ranch.

Western town itself is quaint and enjoyable for a good stroll. The set is well-preserved, and it is fun both as a novelty and as a slice of movie history. As Hollywood doesn’t roll out westerns very often, this set isn’t used much, and it remains preserved as part of the areas history. Naturally, my favorite part of the set was a massive valley oak that could have been up to 400 years old.

The valley oak is the king of the oak trees, standing as tall as 80-100′ and living as long as 400 years. This tree meets its southern range in Agoura and Calabasas, where it was once a dominant tree over the rolling grasslands that are now covered in housing developments. This habitat hasn’t entirely yielded to the bedroom community, and valley oaks are protected within the suburbs, where they often stand in the midst of shopping centers and office parks. To see the oak in its true majesty, you have to hit the trails. 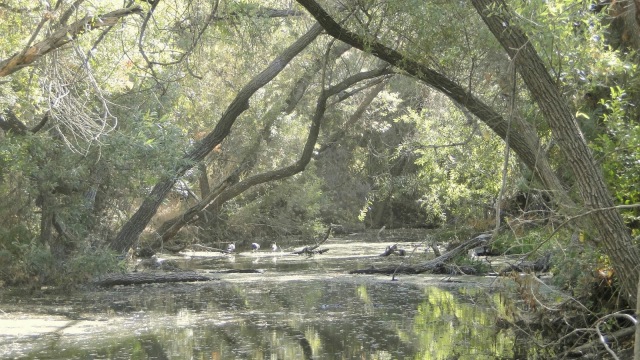 The ranch is now part of the Santa Monica Mountains National Recreation Area, which is cumbersome to say. This area is where I grew up and where I learned to love going for hikes. It’s also the place I most often return to when I come home, in spite of forays to the San Gabriels and Los Padres National Forest. The terrain in San Diego is similar, with chaparral, coast live oaks, and grasslands, but the Santa Monicas are their own brand of awesome and feature things not found in dryer San Diego.

There are a lot of trails honeycombing Paramount Ranch, and it’s possible to piece together a 4 mile loop over the hills, across the grasslands, over the creek, and by the movie set. It’s an easy hike, and popular to boot, although I didn’t see anybody on a Friday morning. Mostly, I enjoyed the valley oaks, but along with that I enjoyed revisiting some of the sights, sounds, flora, and fauna of the region in which I grew up.