Lake Cuyamaca is a man-made lake that collects all of the water run-off on the north side of Cuyamaca State Park. This serene, picturesque lake is stocked with trout for the fishermen, boat docks for the recreators, and hiking trails for those who like to amble. Views of the surrounding mountains are abundant, as are opportunities to walk beneath pines and oak trees on Fletcher Island.

The dam that created Lake Cuyamaca was built in 1888, and it remains the second oldest dam in California. This relatively old structure gives an indication of how long human activity has been taking place in this area. Of course, prior to the dam, this area was populated by Kumeyaay indians, who used this area as their summer home, while also harvesting nuts during the fall. The name Cuyamaca derives from the Kumeyaay word “Ekwiiyemak,” which translates to “the place behind the clouds.”

Those clouds left abundant rain, which is part of the reason why Cuyamaca offered such a lush and abundant floral landscape up until the Cedar Fire. While much of that landscape is now recovering, much of the area around Lake Cuyamaca was preserved, either due to increased moisture from the lake, the easily defensible space around the patches of forest, or the access via numerous roads. Additionally, numerous historic structures, such as the Stonewall Mine, which provided millions of dollars of gold, still stand and are available for exploration to the history buffs.

This area is also a haven for wildlife. On two separate hikes here, I saw two separate flocks of turkeys, several individual deer, and one herd of deer. The lake attracts all kinds of birds, from small songbirds with bright red patches on their wings to gangly cranes and all kinds of raptors. There are also numerous opportunities to view wildflowers, although with this being a dry year there weren’t many wildflowers to view. 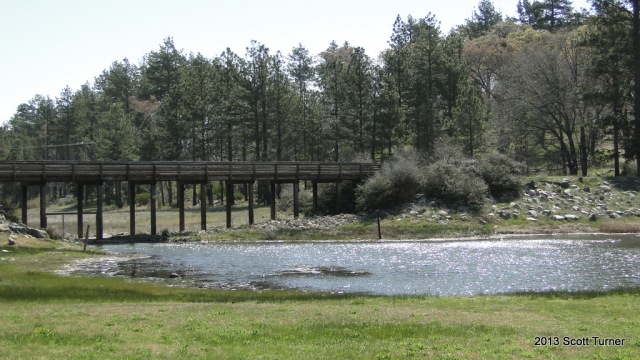 From the parking area at the Stonewall Mine, Taylor and I headed around a peninsula that separates Lake Cuyamaca roughly into south and east coves. Those “coves” are fed by separate streams that flow on either side of the gently swelling and densely forested peninsula. From the north tip of this peninsula, a bridge crosses over to Fletcher Island, upon which one can have picnics, stroll, or even enjoy a labyrinth formed from stones. 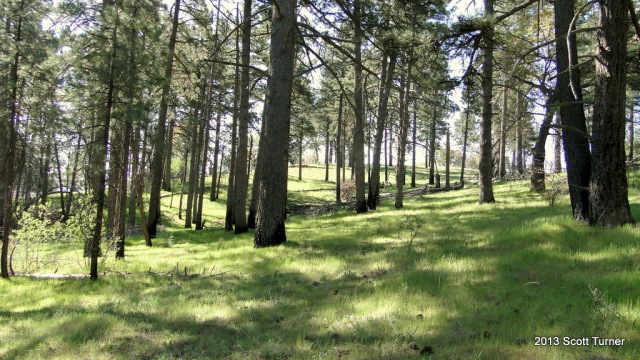 Looking east from Fletcher Island, one can see the vast, rolling flood plain that stretches onward until it reaches Sunrise Highway. This flood plain hold to overflow water that flows down from the mountains only in extremely wet years. During dry years, this plain is a colorful mix of grasses, red reeds, and yellow wildflowers.

A full loop can be made by adding in the Vaquero/Caballero trails, which radiate from Los Vaqueros Horse Camp. These two trails wind through more gently rolling meadows fringed by Jeffrey pines and black oaks. More wildlife parades through this area as well, and by combining Los Vaqueros Trails and the trails near the lake, one can create a satisfying and easy loop hike that includes water, mountain views, forests, meadows, and abundant wildlife.

One Reply to “Lake Cuyamaca”