I got back to my car at the Meysan Lake trailhead just in time to feel the first few fat drops of rain hit my windshield. The threat of a thunderstorm had become a promise, and I needed to find a place to relax. Kyle, Tim, and Dave were still miles away since they got a late start, and I didn’t want to set up camp in the rain. So, I headed back down the mountain into Lone Pine to grab a breakfast burrito at a dive-y local coffee shop that I ate at last year when I hiked around the Cottonwood Lakes area with Kevin.

As I ate the burrito, which was phenomenal, I looked around the walls of the cafe where they had painted notable landmarks from the nearby Alabama Hills. Here numerous granite outcroppings have eroded into fantastic shapes. This eery, dramatic environment has become the backdrop for a number of movies, ranging from old country western films like Hopalong Cassidy to more recent movies like Iron Man (this area doubled for Afghanistan) and Transformers 2.

Although technically part of the Sierra Nevadas, the hills themselves are distinct and even approach unique. Joshua Tree’s granite boulder formations have some similarities, but the boulders here are darker, more fantastically shaped, and lack the characteristic Joshua Trees. The rocks here consist primarily of monzogranite which erodes in a spherical manner along faults and joints within the rock. 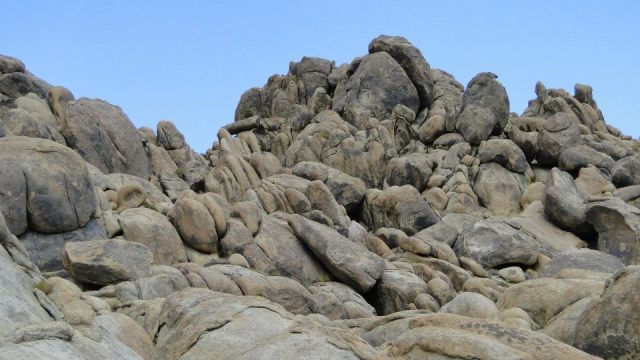 After millions of years, these rocks become the rounder, potato-shaped boulders that form such an eery contrast against the towering monoliths of the Sierras. However, Alabamas are believed to be part of the Sierra Nevadas that has been burried under thousands of feet of sediment which have created the Owens Valley floor.

After the burrito, I looked up at the mountains and saw dark grey clouds swallowing up the uppermost peaks. A low rumble signaled thunder and lightning, and I knew that there would be no more hiking at higher elevations that afternoon. The benefit of the clouds being so thick was that the normally scorching desert environment around Lone Pine was a more manageable 90 degrees.

I pulled up to Movie Road, which is a sort of network of dirt roads on which people can take a sightseeing drive, and decided to take the same trek on foot. I hiked for 1.7 miles through a wilderness of boulders, arches, spires, pinacles, fins, caves, and towers, each seemingly more fantastic than the next. It’s easy to understand why this area was used as a backdrop for so many movies. Visually, there is something new to see at every footstep, and the scenery changes inch-by-inch.

The Alabama Hills may be a footnote in the otherwise epic endeavor of climbing Mt. Whitney, but they do deserve recognition on their own merit. It’s a strange, spooky, comical, and fantastical place that is worth spending several hours exploring. Although I had time to kill, this was anything but killing time.

I left the Alabama Hills having enjoyed an enjoyable day of hiking that preceded the actual main event. Not that the opening act could in any way stage the headliner, but I knew I was already one day in to a great three day experience.
August: 33.8 Miles
Year-to-Date: 885.4 Miles

One Reply to “Alabama Hills”