Pros:
– Some of the most epic scenery ever
– Alpine Lakes
– Towering granite crags
– Adventures at Trail Camp 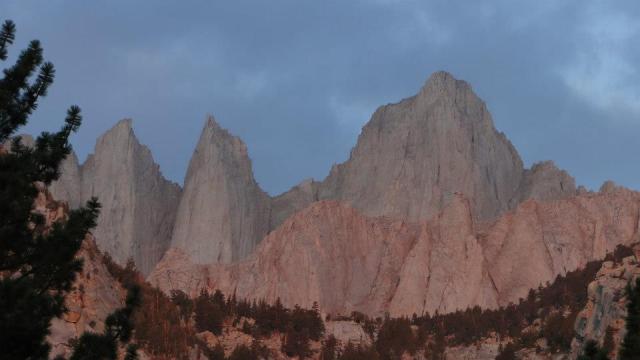 Adventure. Excitement. A hiker craves not these things. Or perhaps he does since, even though events may suck at the time, the memories become something you reminisce over fondly. Consider an early afternoon thunderstorm in the Sierras. Sure, it’s beautiful to see bolts of lightning coming down amidst a torrential downpour when you’re safe at the bottom of the Owens Valley. However, sitting in the middle of one at 12,000 feet while your tent is becoming inundated with water and your gear is getting covered in hail is a different story.

But it’s a story, and no matter how Kyle, Tim, and Dave may have felt about having to dry their gear out once the storm passed, this adventure at Trail Camp did feature some drama that I’m sure we’re all going to remember. 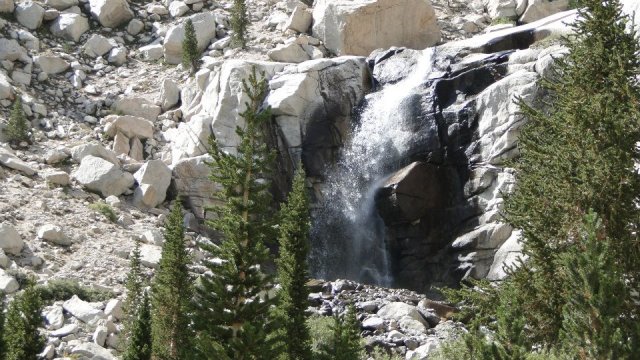 We started out from the Whitney Portal campground around 6:30 in the morning in the hopes that we would get up to Trail Camp in order to beat out the weather. We had thrown around a number of plans, some more ambitious than others, but we knew that anything we did would be dictated by what the weather was willing to allow. Some days, the Sierras are merciful. Other days, they say you gots to pay the toll.

The trail starts from the busy Whitney Portal complex and wastes no time switch-backing up the steep canyon that ultimately leads to Mt. Whitney. The canyon proceeds upward in elevation in steps. First, there’s a steep hill, up which the trail meanders in a remarkably well-constructed way that is never truly taxing. After a long period of climbing, the trail will come to a slightly flat point which offers a brief respite in the form of a flat stretch, as well as some kind of lake or water feature.

The first stretch climbs through Jeffrey pine, white fir, and pinyon pine until it reaches one of these benches. At this point, we took a brief side trip over to the absolutely gorgeous Lone Pine Lake, where we briefly ditched our packs to fill up our camelbaks, snack, and poke around the shores. 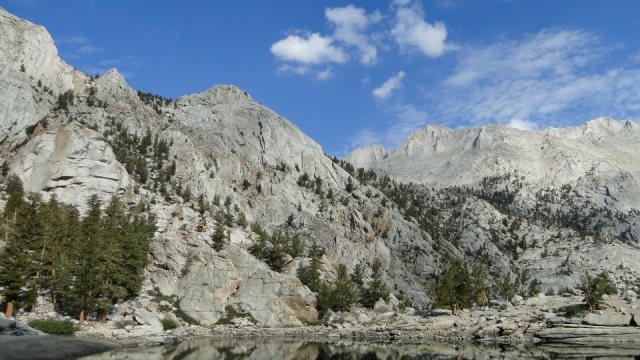 You can camp at Lone Pine Lake, although it’s too far down the mountain to be a reasonable spot to stop for an ascent to Whitney. It would be a great trip on its own though, and since it’s just outside the Whitney Zone, the permit system is pretty reasonable.

After Lone Pine Lake, we hit the switchbacks again, this time until we reached another bench with another lake. The tree zone had changed by this point, and lodgepole and foxtail pines replaced the Jeffrey pines and white firs.

Soon, we were walking along the shore of Mirror Lake, which is closed to camping due to past overuse. The lake was closed many years ago, and the fact that it remains so is a testament to how long it takes the environment to recover at these altitudes. 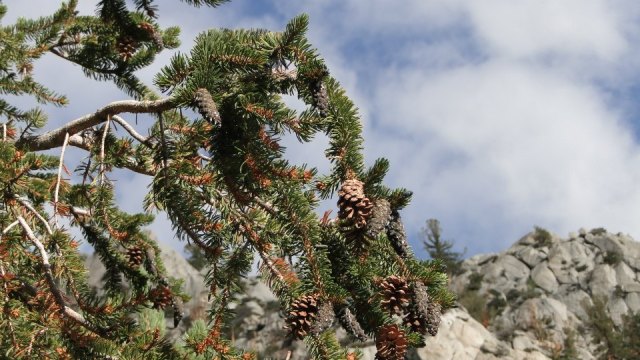 Afterward, the trail meanders upward to the next bench, which features a huge meadow fed by a number of trickling streams. At the west end of the meadow lies Outpost Camp, which is a beautiful tree-shaded camp lined with streams and nestled into a towering granite nook. Outpost Camp is much more beautiful in the sylvan aspects than Trail Camp, to which we were headed, but it does have the disadvantage of being 2.5 miles further away from the summit, hence it remains a less popular campground.

Soon after Outpost Camp, we reached the treeline, which is where the real fun starts happening in the Sierras. The weather at treeline is too severe and extreme to support tree growth, and plant life is pretty much limited to small ground plants and the occasional bush growing along a stream. Rocks rule the scene in these areas, and the formations here probably inspired the creation of the word “dramatic,” since there’s really no other word for the way the mountains tower above you in such powerful angular shapes.

The trail soon passes Trailside Meadow, which is a popular stopping point due to the small island of lush greenery fed by the streams that drain Consultation Lake. The final round of switchbacks await as the climbs winds its way through often maze-like fins and ridges of granite rock. These fins and ridges serve as numerous drainages and washes for water and snowmelt coming down from the surrounding peaks and crests. 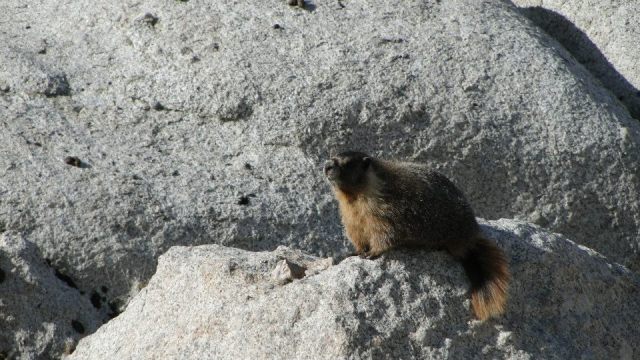 At a bend in the road, Consultation Lake appears as a massive blue sapphire tucked into a towering granite amphitheater. After we set up camp, I took an additional day hike that had me scrambling over boulders and climbing up a few cracks, much to the chagrin of a mildy pissed-off marmot. 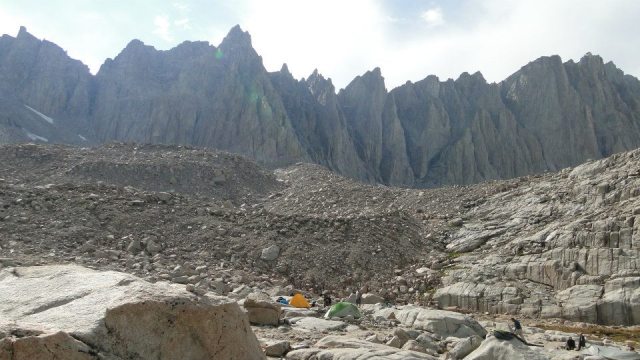 Finally, after 6 miles of quad-busting huff and puff, we had reached our destination. Trail Camp is a popular campsite for people who want to camp overnight and head up Whitney in the early morning hours. It sits at 12,000′, so it also offers a great chance to acclimate to the high altitude overnight. We set up our camps, feeling fairly tuckered, and soon became aware that clouds were gathering. It appeared that we were about to get some weather. 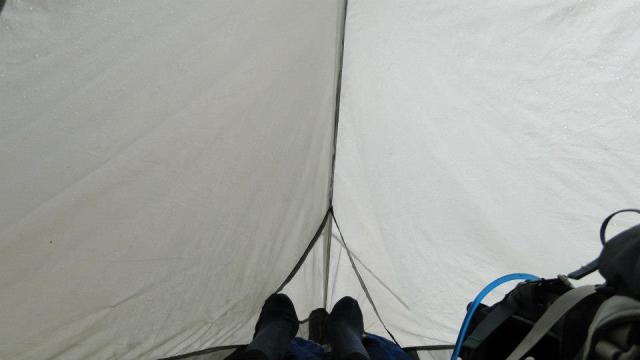 It was pretty apparent that no other hiking was gonna happen for the remainder of the day since we were all pretty spent from the initial climb. So, we all tucked into our tents to take a nap and enjoy a well-earned rest.

Our rest was rudely interrupted when the thunderstorm went from a light pattering of rain and distant rumbling to a full-fledged downpour, complete with nearby lightning strikes and hail. Kyle’s tent and Tim and Dave’s tents were actually tarps that, while having the advantage of being lightweight and comfortable, aren’t totally weatherproof.

Equipment was dampened. Wind kicked over a few structural supports. Soon, there may have been a few muttered “You gotta be kidding me’s.” A lot of gear was soaked, and we were all pretty concerned that the weather would preclude us from drying out. Having wet gear is bad enough, but having wet gear at 12,000 feet, where the nighttime temperatures get down into the 30’s is even worse. More people suffer from hypothermia during the summertime than any other malady.

Yet, the storm cleared up, and before we could start biting our nails, the sun came in out in a brilliant display in which the mountain cheerfully reminded us that we were at its mercy. Aside from all of the brilliant scenery, camaraderie, and adventure, a central, but subtle theme in hiking is that you are a guest at the mercy of the scenery around you. While you don’t need to fear your surroundings, you must always be prepared and, above all, respectful of what a mountain can do to you if it gets in a shitty mood.

The gear dried off and the night turned out to be clear and lovely. After we enjoyed our dehydrated meals in a bag – don’t scoff; mine was delicious – we decided it would be best to turn in early for the ordeal that was awaiting the next morning. 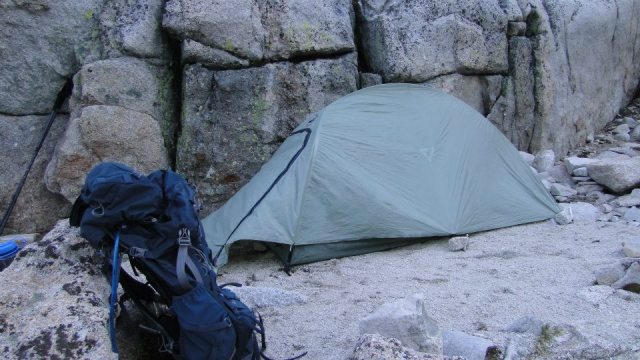 The plan: wake up at 3:00 am, gather our stuff, trudge 1,600′ up to Trail Crest in the dark, hike across the long ridge up another 1,000′ to the summit of some stinky little bump called Mt. Whitney.

One Reply to “Mt. Whitney Trail to Trail Camp and Consultation Lake”