Thank the universe for hills. They may seem like a pain in the ass when you’re climbing them, but they do you the following benefits: one, you get fit; two, you get a good sweat, partially cleansing some of the crap out of you; three, you get great views. More than anything though, you can be grateful that more people don’t like to climb hills. You want to be alone? Climb a hill. Chances are that you’ll be the only one nuts enough to trudge your way up to the top. You may meet somebody, but that person may be so occupied that they will leave you alone. Most people are content to admire from a distance, and the thought of huffing and puffing up a steep slope turns them off like a broken Playstation.

Now, I don’t mind seeing other people on trails. I rather like it most of the time, granted that those I meet aren’t holding extremely loud conversations, nearly running me down with mountain bikes, or wearing neon-colored clothing. I like hiking with other people two, like I did this afternoon with Alejandra and Justin. But sometimes, I want to be alone, specifically as in when I get off of work and want to get a quick ass-kicking in.

Hiking has rarely been a group sport for me. The vast majority of the time that I have spent walking on undeveloped land has been spent by myself. As I get older and more comfortable and settled in myself, I walk farther, and therefore spend more time alone. It’s not necessarily a misanthropic venture, although I will admit to being a fairly introverted person in spite of a capacity for friendliness. Hiking is often the best way to use my body, switch off my mind, burn my spare energy off, and come home feeling mellow, clean, and happy. Other things accomplish this, but none of them enable exertion, meditation, and enjoyment of nature the way a hike can.

Bulldog road enables this sense of solitude by traveling through a rarely-visited stretch of Malibu Creek State Park. It branches off of the main stretch of Crags Road from the back entrance to the park, located in the community of Malibou Lake. After a brief amble by the side of a creek, the trail, an old fire road, begins to climb in earnest. The climbing is rarely difficult, save for the last stretch which always seems determined to test my stamina. The views grow increasingly sublime as you slowly gain sight of the Goat Buttes, Saddle Peak, the San Fernando Valley, Ladyface Mountain, the Simi Hills, and the San Gabriel Mountains, ultimately ending with a view of the Ocean and West Los Angeles.

I have never encountered people at any point beyond the creek crossing, which occurs about .7 miles into the hike. From that point to the top of the trail, which intersects with Castro Ridge Motorway, there is hardly ever anybody present. One can climb in solitude through shady stretches on the direct north side of the hill through groves of live oak and bay, or through elfin forest featuring manzanita, chamise, sage, ribbonwood, and a few trippy plants I had never seen before. 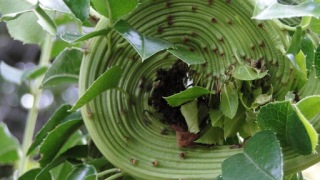 Once one reaches Castro Motorway, you have the option of walking in the direction of Castro Peak, which is a privately-owned antennae installation (boo for private land, yay for cell phone reception). You can also walk in the direction of Corral Canyon Road, which winds its way up the south side of the hill from Pacific Coast Highway near Solstice Canyon. Further down this road, the trail follows the crest past some sandstone outcroppings reminiscent of Vasquez Rocks. Beyond this, the crest trail eventually switchbacks down into Malibu Canyon before eventually terminating at Malibu Canyon Road. The catch, of course, is that one would have to hike all the way back up to the top, hike up to the junction with Bulldog, and then return the way you came. All together, this would probably be about 15 miles with an additional 1,500 feet of gain (I’m guesstimating), and I wouldn’t recommend it unless you’re really trying to train – and there are better hikes for this.

I once completed a grand loop of Malibu Creek State Park in which I took Crags Road from the Grasslands Trail, up Bulldog Road, across the entire length of Castro Crest, up along the side of Malibu Canyon Road, and then back to the trailhead on Mulholland. Until the very end, this was a great trail. However, once I hit the highway, I had cars blowing past and full sun exposure. I don’t recommend doing this, even though 14 of the 16 miles were gorgeous.

Ultimately, this is a great way to get a work-out, catch up on some solitude, spy some views, and feel like you accomplished something in under three hours.

Up next: Oak Grove to High Point on Palomar Mountain.