Laguna Meadow is one of the natural marvels of San Diego County. This massive, multi-limbed meadow encompasses several square miles of territory in San Diego’s Laguna Mountain range, and it offers a multitude of different recreational activities. It’s hard to overstate the beauty and uniqueness of this place as nothing in Southern California is quite like it.

Note: You will need a National Forest Adventure Pass to park here.

Here is the track I took. I’ll include a paragraph or two describing the route.

If you tell people from San Diego who are not in the natural know that there is a massive meadow, complete with lakes, pine and oak forest, wildflowers, and which is relatively flat with views more reminiscent of Montana than Southern California, they are likely to tell you that you are full of shit. First of all, many people believe that the natural flora of San Diego stops at Chaparral. Not true of course, as San Diego County has the second greatest biodiversity of any county in the entire country (Riverside County is first). Unlikely as it seems, there is some majestic mountain scenery to be found in this beach town, and it is well worth the exploration.

Those who have read this blog are no doubt familiar with the Laguna Mountains, as I have written about them numerous times already. Yes, this place exists, and yes, it is beautiful. You have all the things I mentioned in abundance, and the trail here is remarkably flat. It is amazing enough that this place is here, but the entire course I took was between 5,400′ and 5,600′, which just doesn’t happen in the mountains. Mountains go up and down. That’s just what they do.

Today, I hiked from the Laguna Meadow Information Center, which is a small kiosk at a section of the forest just before the road takes a big bend going into the community of Mt. Laguna. Spurs for the Sunset Trail, the Big Laguna Trail, and the Agua Dulce Loop emanate from this trailhead, giving a number of different options. On this option, you go left at the first junction and then right at the fork. The left trail at the fork is the Sunset Trail, which is also great but more challenging. The middle trail links into the Big Laguna trail system, which is a confusing network of trails criss-crossing and circling the meadow. I highly recommend getting a map from the visitor center if you are new to this region. There are a lot of different trails all called the Big Laguna Trail, and it quickly becomes hard to keep them all straight.

I took the first right I came upon, which skirts the southern edge of the meadow as it passes fenced off property at Laguna Ranch. There are usually cows around here, but if you keep your distance they won’t mind you. The trail then skirts the edge of the forest before coming to yet another junction. I bore left here, and followed the meadow northward toward the Big Laguna Lake. Pass two different opportunities to go right when you come to a big fence. To the right is Little Laguna Lake and the two campgrounds. You can go loop this way, but you’re looking at another 1.5 miles when the good stuff is just to come. Finally, you’ll come to a point where you have to go left over a small bridge. Go that way. It’s worth it.

The trail then bears right to traverse the east shore of Big Laguna Lake. This ephemeral lake was actually fairly full, considering it is August. The area got about an inch of rain due to recent monsoonal activity, and the ground was pretty well soaked. Many of the plants looked fairly invigorated, and there were even some green grasses and wildflowers in evidence. The east side trail loops around about half a mile north of the lake at the junction toward Noble Canyon. Probably best to avoid Noble Canyon as it descends, meaning a re-ascent would be in order. Instead, go left and stay left as you will drop back down on the west side of the lake. 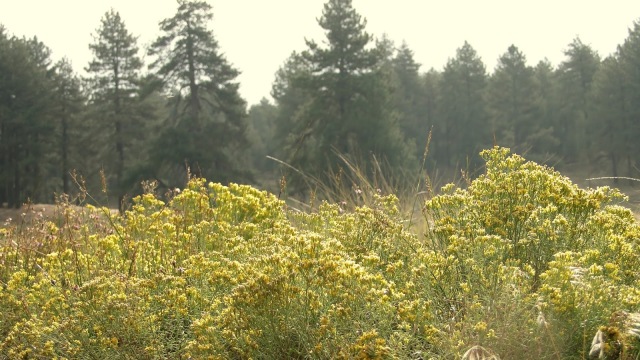 It’s difficult to fathom just how large this meadow is until you walk around it. This hike was 7.9 miles, and I didn’t even cover it all. When you finally get to the south end of the lake, bear right toward Water in the Woods and follow the Sunset Trail home to make a big huge loop. You just walked through one of the most beautiful places in San Diego, if not Southern California. There really is no parallel to what you see here. Even Palomar, which has the meadows, does not have the same open, big sky feel. There are times when this actually feels a bit like Montana.

There are two things worth noting. Mt. Laguna is a magnet for mountain bikers. My feelings toward mountain bikers have not softened, as you can expect to spend a fair amount of time standing off the trail waiting for loud, noisy bikers to pedal by. Technically, they are supposed to yield to you, but mountain bikers have almost uniformly demonstrated that they don’t care or don’t know about this bit of trail etiquette. It’s a mild annoyance when there aren’t many people around, but on the weekends, this place is a racetrack.

Finally, the Laguna Mountain area has been hard hit by one of the worst pests in Southern California history, the Gold-Spotted Oak Borer. This bark beetle was likely imported from Mexico as a stowaway on somebody’s firewood in the late 90’s, and it has killed about a third of the black oaks in the forest. Come here during the fall and witness the black oaks in all of their golden glory, and you’ll realize what a tragic shame it is to see every third black oak dead with many more under attack or dying.