Nestled within the sea of concrete, advertisements, track housing, and traffic snarls that is Orange County lies an oasis of grass, chaparral, and riparian habitat. Aliso and Wood Canyons are the southern most part of a preserved portion of the Laguna Coast, which also features Crystal Cove State Park. While evidence of man is abundant throughout the hike, this cool and quiet habitat is a welcome break in one of the most developed parts of Southern California.

Note: You will need to pay $3 for parking unless you get there early enough to park on a side street.

The citizens of Laguna Hills take their wild places seriously. In 1989, a developer wanted to swoop in and develop large swaths of the hills about the Laguna Coast. Where so many developers had made millions perching expensive homes on cliffsides with ocean views, these developers also sought to make even more. However, the citizens of the area banded together and forced the development company out, thus preserving numerous canyons, hillsides, and watercourses.

I set off for my first exploration of this area at Wood and Aliso Canyons. A network of hiking trails connects these two canyons, which feature trickling streams, oak woodlands, and several sandstone formations that boast caves that used to shelter outlaws. The area is not pristine as houses stand perched atop hillsides much like they do in Penasquitos Canyon. Like Penasquitos Canyon, however, this fact is often forgotten once you plunge into the cool, dark recesses of oak woodland.

The trail starts off on a tedious note as you have to walk along a service road for 1.5 miles before coming to a junction. I followed the hike in Jerry Schad’s Afoot and Afield in Orange County, and I opted to turn left upon reaching the trail for Dripping Rock Cave. Or at least I think it was called that. Either way, this cave is one of the higlights of the trail, and I enjoyed the unique reverberation by singing a few verses of “Blackbird” a capella. This would be a great place to record acoustic music. 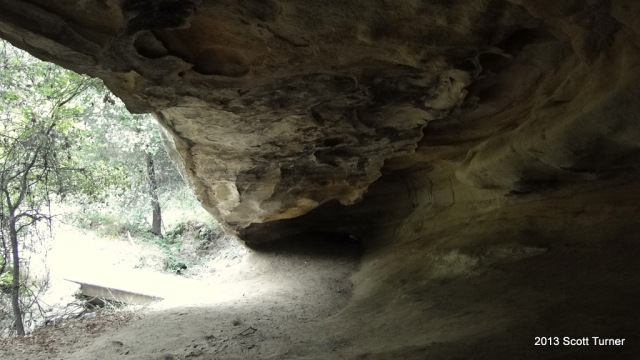 After the cave, the trail sets off on a no-screwing-around climbing section up to the West Ridge fire road. The trip then traveled east along this fire road, which wasn’t terribly interesting. Most of the time, fire road hiking is pretty tedious as fire roads tend to skip the best parts. However, the fire road didn’t last forever, and after joining up with the Lynx Trail, I found myself on the bottom of Wood Canyon where a trickling stream greeted me.

There are two options at this point. 1. stick to the fire road and continue to get buzzed by mountain bikers, or 2. take the Wood Creek Trail, which is supposed to be closed to mountain bikers but also hugs the creek and sticks to some shaded oak woodlands and some sycamore savannas. I chose the second option, although some jerk on a mountain bike came screaming up behind me and almost gave me a heart attack. Just because the sign says no mountain bikes doesn’t mean it applied to that guy.

After a few miles of this loveliness, the trail reconnects with the initial fire road and you are on your way back to the trailhead. While this is not a remarkable place to hike, it still features everything that makes coastal SoCal hiking great: oaks, sycamores, streams, chaparral, sandstone, and grasslands. We are lucky that people cared enough to preserve it.