On October 25th, 2003, a lost hiker lit a signal fire in an attempt to be rescued. He lit the fire in spite of intense Santa Ana winds. The winds picked up, and the fire quickly grew out of control. As it was late in the evening, and since the forest service and CalFire have policies against doing water drops during the dark, the fire quickly spread. Within 9 hours, the fire, which became known as the Cedar Fire, had burned over 60,000 acres of dry chaparral and killed 12 people. Before the fire was contained nearly a month and a half later, the Cedar Fire incinerated over 280,000 acres of land, killed 15 people, and destroyed 2,820 buildings, making it the largest and one of the most destructive fires in the history of California. 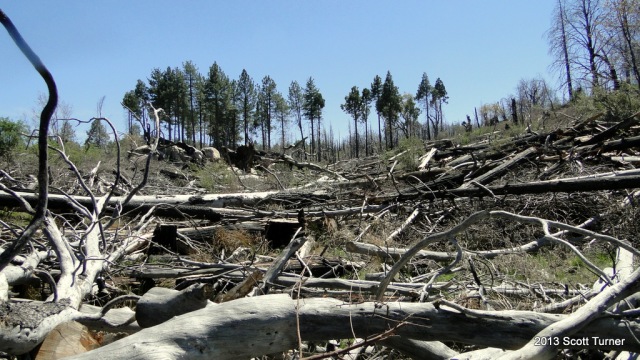 Days before the fire began, the forests of San Diego county were in a somewhat desperate state. Due to years of prolonged drought during the 90’s, the forest began suffering from infestation of the bark beetle. This beetle is always present among trees, in which it burrows and lays its eggs. When precipitation is abundant, the trees produce their own defenses against the beetle, and only weakened trees are affected. However, these defenses depend on water, and, without water, many trees failed to defend themselves, thus dying and toppling.

After years of die-off, the forests of San Diego County, especially those of Cuyamaca State Park, began to resemble logs sitting atop more logs sitting atop kindling. Dry conditions and Santa Ana winds created conditions for a catastrophic fire, and the forest was ready to burn. Initially, the Cedar Fire burned west, fueled by hot, dry easterly winds. However, the winds reversed directions in the later stages of the fire, driving the fire directly towards the Laguna Mountains, of which Cuyamaca lies in the center.

By the time the fire had finished its work, approximately 90-95% of what was once the greatest forest in San Diego County had been thoroughly incinerated. Smoking debris lay underneath a blackened ghost forest. Wildlife, which had always been abundant in the Cuyamaca area, seemed to vanish. The fire became what it became due to perfect storm-type conditions. However, those conditions had been years in the making, as drought and fire suppression tactics led to more dead trees and a lack of proper ways to clear the debris. The Forest Service had forbidden any fires from burning for years, and yet periodic fires are necessary to clear out the debris that builds up underneath the forest canopy. While the Santa Ana conditions were predictable, the condition of the forest was at least partially due to man. 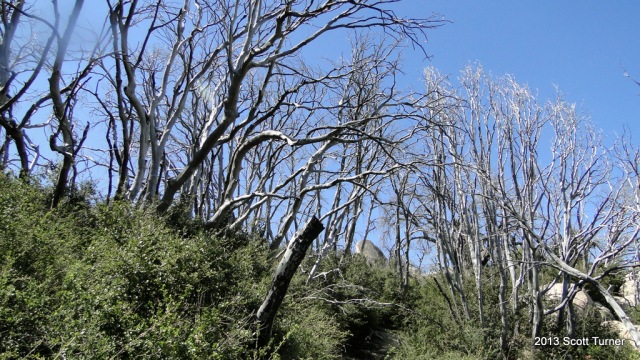 A similar incident wiped out a sizable portion of the Palomar forest in 2007. Within 5 years, about half of the coniferous forest in San Diego County had been destroyed. Its recovery could take 100 years, provided that the precipitation will support regrowth. And therein lies what could be the heart of the catastrophe; the forest began to die long before the fires delivered the killing blow. High average rainfall totals made possible lush forests in what has essentially been a desert, yet the rainfall averages in the Palomar and Laguna Ranges had been declining for many years.

One might say that man has little control over how much rain falls, yet the trends all mirror what global warming science has been saying all along: the climate has been changing, and the results will be unpredictable, and possibly catastrophic. Nobody can lay all the blame for the Cedar Fire and the 2007 Poomacha Fire on global warming alone, and yet its effect cannot be ignored. The destruction of the Cuyamaca forest can be seen as direct circumstances of a climate that has been changing for some time. The images of blackened trees represent not just what we stand to lose but what we have already lost.

So, when Earth Day comes around, it’s good to say a word for the world we live in and celebrate nature. It’s also good to get out and go for a hike. However, it may be better to remember that we are not apart from the world, and what happens to it also happens to us. What we do also affects the planet, which is what we intend to pass on to subsequent generations. Much damage has been done and more damage is still to come. So, when Earth Day roles around, perhaps it is best to remember that the world we have built upon the Earth protects us, but it also insulates us, leaving us oblivious to the damage we do until a Cedar Fire comes along and punches us in the stomach.

Instead of lamenting what is lost, however, the best hope may be to step out and love what is there. Develop a relationship. Learn about how and why the natural world works. In doing so, one does not just understand trees and rocks and flowers, one also begins to understand that life has a way, and this way creates beauty and miracles that have always incited awe. If we accept that what happens to the world also happens to us, we may avoid the Cedar Fires of the future, both literally and spiritually.