Los Pinos and Trabuco Peaks are two moderate peaks accessible from Main Divide Road in the Santa Ana Mountains. Both peaks sit around 4,500′, and, taken together, they present a borderline-strenuous walkabout that throws in a large stretch of Main Divide, which runs along the north-south crest of the Santa Anas.

Note: You will need a National Forest Adventure Pass to park here.

The Santa Ana Mountains, while modest relative to their larger neighbors, offer the advantage of featuring a panoramic view of the entirety of Southern California – depending on where you stand, of course. Santiago Peak, the range’s high point, offers 360′ views, but many of the other peaks in the range also offer up 100 mile views in just about every direction. While the Santa Ana’s are neither particularly tall nor particularly interesting in the botanical sense, they are spectacular when it comes to views and long walkabouts.

My goal was to bag the two highest peaks south of Santiago – Los Pinos and Trabuco – while enjoying long stretches of trail perched high upon the crest of the range. To this end, the hike did not disappoint. I had views as far south as Cuyamaca Peak, as far north as Mt. Wilson, as far east as the San Jacinto Mountains, and as far west as Catalina. The view northeast was obscured by Santiago Peak. Bonus features included patches of pine and Douglas fir forest, which granted sporadic pools of shade for just long enough to cool down, as well as a few modest patches of snow.

Even though it was often windy and cool in the shadows, this was a warm hike. I can’t imagine that these mountains are enjoyable to hike during the warmer months, since all three of the hikes I’ve done here during winter were warm and sweaty affairs. That may be a timing issue, but with the lack of shade and the open, dusty trails, this is probably not the place to explore during summer.

Los Pinos Peak was straightforward enough. Once you hike up the 1.7 miles to Los Pinos saddle, you can take the trail that branches off to the left on the other side of the guard rail. From here, you follow the undulating ridgeline until you reach an unassuming peak that has some wonderfully comfortable rocks upon which you can sit and eat your breakfast or lunch. The views are better here than Trabuco, especially since Los Pinos is set far enough apart from Santiago Peak that the high point doesn’t completely dominate the view. 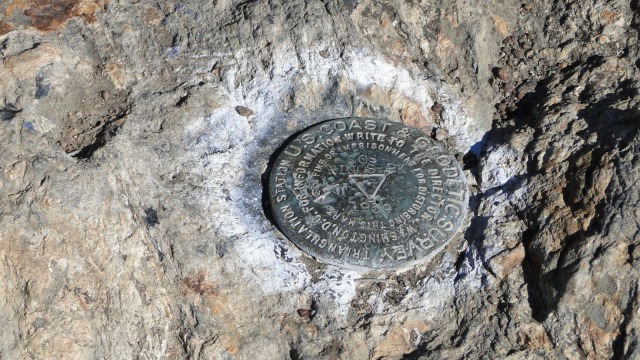 Trabuco Peak was a different story. There are three equivalent peaks in this area, and I’m not even certain I climbed the right one. However, the one I climbed was the tallest, as well as the steepest and most overgrown, so I’m claiming it whether I’m correct or not. I wouldn’t really recommend this peak since it’s overgrown, there’s no obvious summit, and it’s set pretty far apart from the major trailheads for this trail system. In short, it’s not worth the 11 mile walk to get here. I only did it to add another destination, since the Los Pinos hike is 5.4 miles, and I wanted to spend some time on Main Divide.

Two words of caution: Main Divide Road is really popular with the mountain biking crowd. Most of the ones I met were pretty cool, yet there was still that one guy that has to come screaming around corners at 25 mph. You know. . . that guy. Also, this trail goes up and down a lot, so don’t hike this if you’re the sort of person that can’t stand going uphill both ways. Otherwise, great views, good workout, and enough variety to keep it consistently engaging.