Let Your Body Go and Your Mind Will Follow

When I started hiking this year, I looked at things in terms of mountains I wanted to climb, numbers of miles I wanted to hit by each month, and trails I had never heard of in places I didn’t know existed. I was looking for adventure that would help me get to know a new area, as well as to challenge myself to seek out new adventures. I got that, but in the process I got something far more important: mental health.

There are a number of studies out there that seek to verify and quantify the effects of exercise on both the body and the mind. Although nobody really knows how it works, results from these studies reveal the following date:

1. Exercise causes the brain to release hormones and neurotransmitters that help you feel good. This operates much like drugs, except without the negative side effects (plantar fasciitis, aside).

2. Exercise releases and purges some of the toxins in the body and in the immune system, contributing to our overall physical health, which, of course, includes our brain. The better the brain functions, the better the mind functions.

3. Exercise increases body temperature, which, reportedly, has a soothing effect.

4. Meeting exercise goals and getting into better physical shape tends to boost confidence.

5. Exercise takes your mind off of worries. There’s something about using major muscle groups in a rhythmic manner over an extended period of time that tends to push all of the stress out of the mind’s focus – or, possibly, allows the mind to work through it uninterrupted. This disrupts, or even eliminates, the cycle of negative thoughts that feed anxiety and depression.

6. Exercising tends to increase social interaction. But not only that, it puts you in new situations where you can meet new people, learn new things, and share aspects of your self that might otherwise remain dormant.

7. There are a number of coping strategies out there, including drinking or using drugs, eating, avoidance, and  self-indulgent dwelling. They all are effective in their own limited, destructive ways. However, exercise is a positive coping skill that not only has physical benefits, but carries with it a positive social connotation; tell people you do exercise all the time, and they tend to view you positively. This is a coping skill that is universally favored, accepted, promoted, and honored – and for good reason.

I had a very general, non-specific sense of all of this going in. What I didn’t know or expect was the following: one study shows that a 20 minute walk outside can have the same stimulating effects as a cup of coffee. Additionally, other studies indicate that exercising outdoors can increase the beneficial effects by 50%. That’s 50%. Not only that, but those who exercise outdoors are more likely to continue exercising, as described by this quote:

“Exercising in natural environments was associated with greater feelings of revitalisation, increased energy and positive engagement, together with decreases in tension, confusion, anger and depression. Participants also reported greater enjoyment and satisfaction with outdoor activity and stated that they were more likely to repeat the activity at a later date.”

The ultimate result of all this wandering around outside, at least for me, was vitality. We talk about well-being, health, inner peace, and happiness. Yet, for all of those nouns, none sum up the positive effects of hiking as much as the word vitality, which is defined as such:

This definition is very analogous to the fabled description of “feeling alive,” and I think it is a pre-condition to any of the other states that we strive for. In addition to that, it is a biproduct of what, at first glance, can appear to be redundant, masochistic repetitive exercises in the middle of nowhere, often alone. This suggests that happiness occurs in the doing and is not a goal that one pursues in and of itself. 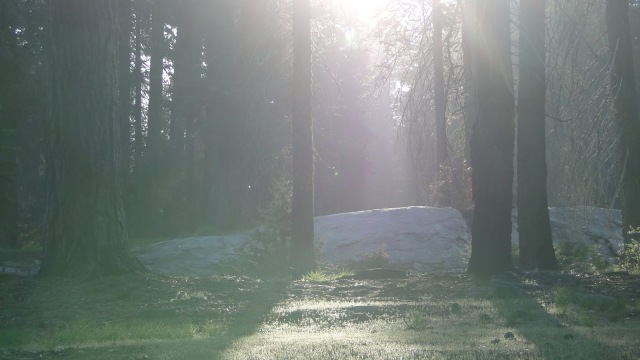 After eight months of hiking and in spite of the sore feet (which were entirely self-created and a product of my own negligence), I achieved a kind of vitality that I had never experienced before. Sure, my happiness is the product of a number of things, but I have never slept as well or as deeply, had as positive an outlook, or achieved as much as I have this year. Again, there are a number of reasons for all of this, but hiking – walking for miles in beautiful places – has been a huge contributing factor to most of the good things I’ve experienced.

I encourage everybody to find some kind of exercise they love and do it outside. Put your exercise bike outside. Do your yoga outside. Lift weights outside. You’ll get all the benefits, plus extra benefits for doing it under the sun. And don’t take my word for it; do the research, and you’ll see that diets, anti-depressants, drugs, alcohol, and worrying won’t do nearly as much for you as a good workout in a natural setting.