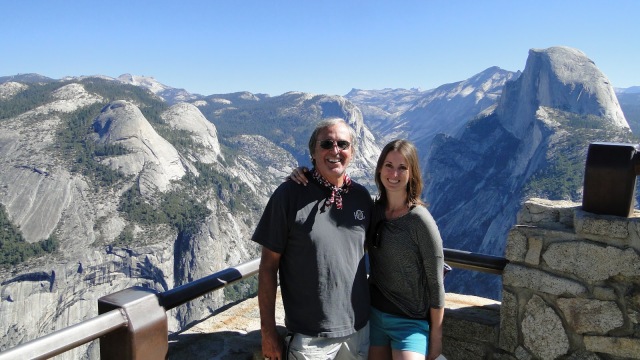 The Panorama Trail is one of the more popular and famous trails in Yosemite. It doesn’t rank quite up there with Half Dome or Yosemite Falls, but it still encompasses one of the most popular areas of the Valley, from Glacier Point two the canyon holding Vernal and Nevada Falls.

The most common and sensible way to hike this trail is to start at Glacier Point, which is 3,200′ above the valley floor, across Illhouette Gorge, and down the first stretch of the John Muir Trail, past the waterfalls and the ever-changing views of Half Dome, Little Yosemite Valley, Nevada Falls, and Liberty Cap. The less sensible way is to do it in reverse, beginning at Happy Isles, climbing up both falls, and then climbing all the way to Glacier Point.

Our party featured a chap with an artificial hip, Kelly’s dad, and several people unaccustomed to taking on such ridiculous elevation gains, and therefore we took it in the sensible way. And really, I wouldn’t advise anybody to do it this wayexcept for those gluttons for punishment who think it isn’t a hike unless you suffer. This trail is about the scenery, and it becomes very difficult to enjoy scenery when you’re sweating in the hot September sun while looking down at your feet and wishing that the gods had never invented hills.

Kelly, her dad Dave, her uncle Ron, and her cousins Colleen and Michelle, and I took a shuttle bus up to Glacier Point from Yosemite Lodge. Along the way, we were treated to the drolly-flavored cheese of a tour-guide who sounded like an NPR announcer running at 60% speed. The talk, which focused on the history of Yosemite, was informative, although Dave may have pulled a few muscles from rolling his eyes so much.

We arrived at Glacier Point, did the obligatory oohing and aaahing at the famous views, and set off down the Panorama Trail with the expectation of epic-flavored epic views of epic epicness. We started out as a group, but we quickly left Ron, Colleen, and Michelle behind. Although I would have liked to have spent more time on the hike talking to the three, I got the impression from talking to them later that they enjoyed the much slower pace, which gave them an opportunity to really soak in the experience.

This hike was a big deal for Ron, especially, and I have to tip my hat to him for pulling this off. He had his hip replaced, and, although an artificial hip isn’t the tragedy it may have been in, say, 1745, it stills makes an 8.5 hike fairly challenging. He did the hike at a very slow pace, but he did it all the same. He deserves big kudos for this. It’s important for people who get really advanced in a sport of hobby to recognize that they cannot take things for granted. What is a relatively easy jaunt for one person is a long-awaited, strenuous bucket-list item for another person. We should always honor that. 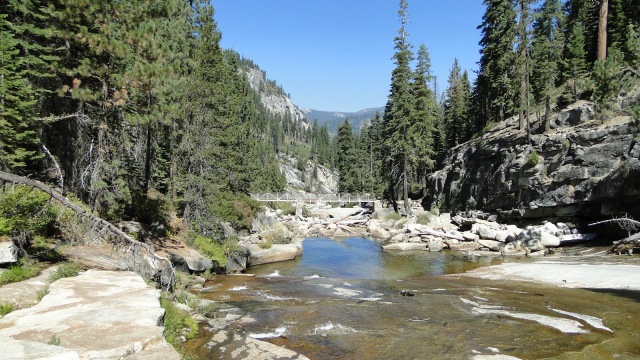 Eventually, Kelly, Dave, and I made it to Illhouette Creek at the spot where it begins to cascade into one of the lesser known waterfalls in Yosemite. We sat down for a rest and some snacks. Speed-demon Dave found that, if he sat for two long, his muscles would start locking up, and so he set off for the rest of the trail, leaving us slow pokes behind. Kelly enjoyed some sun salutations, and I filled up my Nalgene with sweet, clear water from the creek. There is no water better than mountain water, I am convinced. 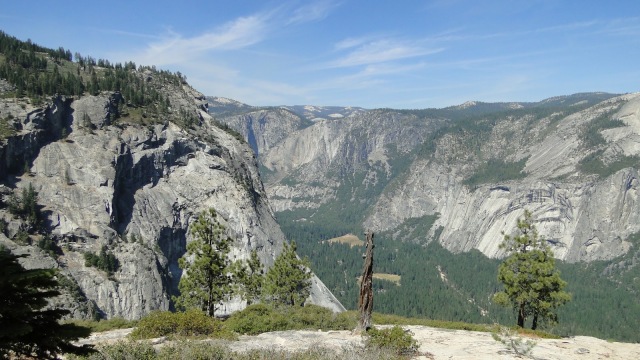 Kelly and I stuck around long enough to let Ron, Colleen, and Michelle catch up, to check in with them, and to wrap up our break and head on. After a short slog up what another family member dubbed “Hamburger Hill” (it was more like a medium-rare sirloin, whatever that means), we hit a lovely stretch of forest leading down to Nevada Falls.

At Nevada Falls, we took the John Muir Trail instead of the famous Mist Trail since neither Kelly and I had any interest in fooling around on a treacherous staircase hewn out of granite. This may have been one of the most enjoyable stretches of the trail, as it clung to the cliffside and featured gorgeous views of the back of Half Dome, Liberty Cap, and Nevada Falls. We sat down for lunch at the edge of the cliff, and marveled in the views, the cool mountain air, and the relative solitude. 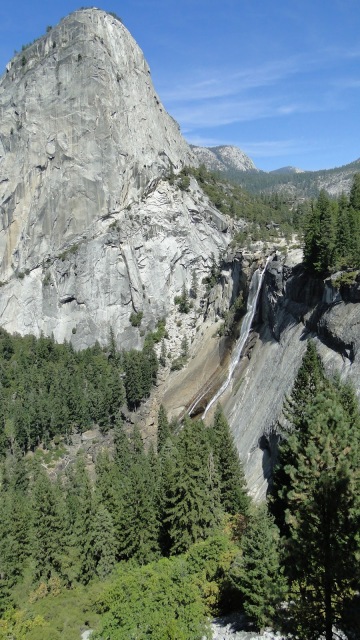 However, the pure enjoyment wouldn’t last long as we came upon the only downside of this hike. The last few miles feature a punishing, knee-busting stretch over asphalt. Along this stretch, you’ll find plenty of people who were clearly not prepared for a hike of this magnitude. Consider the woman who had to be at least 6-months pregnant who was hiking without a water bottle. Or, perhaps consider the French lady who was hiking down in Converse All Stars while smoking a cigarette. Or perhaps you can consider the folks who were trekking UP this trail in flip flops. I get that waterfalls are popular destinations, but come on, folks. Do the research and come prepared. Don’t hurt yourselves.

Finally, we reached the bottom of the hill and completed the hike with a short stroll back to our campsite, which was mercifully located next to the trailhead. We had wracked up 8.5 miles and descended over 3,200′ to the valley floor, witnessing some of the best mountain scenery around. We would enjoy a well-earned dip in the Merced River and a delicious bowl of vegetarian chili, all while enjoying quality family time.

This is a great hike – one that I would highly recommend to anybody visiting Yosemite. It is challenging, but not overly taxing. The views are great, even iconic. There are some difficult and less enjoyable stretches, but for the most part it’s a pleasure from start to almost finish.