Note: I am retiring pros and cons.

Kelly and I were so excited to go on this trip that I nearly almost not quite convinced her to leave at 10pm the night before the trip was supposed to start. We had reservations to camp in Yosemite Valley for three nights, along with Kelly’s parents and some of her cousins, her aunt, and her uncle. Not only were we ready for the break, but this would be the first time I got to share something that I absolutely love, camping, with Kelly.

More reasonable heads (well, just one – Kelly’s), prevailed, and we woke up at 3:30am Wednesday so as to get to Yosemite with enough daylight left to enjoy a hike and some relaxation time with the family. The trip was long, but pleasant enough, and around noon, we rolled into the valley, set up our camp, and melted right into the tranquility of one of the most beautiful places on the planet.

Yosemite is the rock star of national parks, featuring more iconic scenery than any other park in the country aside from maybe the Grand Canyon. The most famous feature – Half Dome – graces the California quarter, as well as numerous license plates. Climbing Half Dome is so popular that the National Park Service set up a strict quota for every day of the week. The roster of famous spots reads like an all-star team of mountain scenery: El Capitan, Bridalveil Falls, Yosemite Falls, Glacier Point, Sentinel Dome, North Dome, Cloud’s Rest, Cathedral Rocks, Vernal Falls, Nevada Falls, Tuolumne Meadow, Tenaya Lake, Tunnel View, and Mariposa Grove. 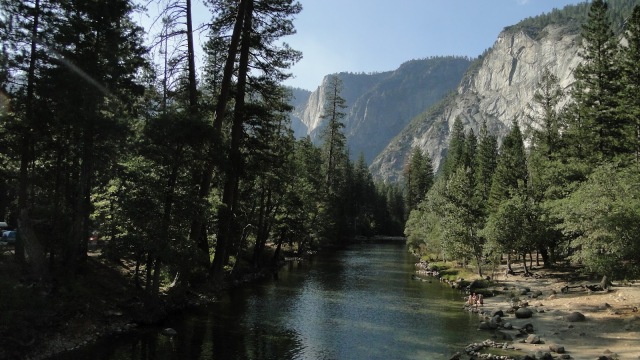 Yosemite is justly famous for its scenery, but it’s significance and history also deserve a brief mention. Because of the fervent efforts of John Muir to document the park in words and of Ansel Adams to document the park in photographs, Yosemite became the prototypical example of what a National Park could be. As a result of the work of both men and countless others to promote Yosemite to what it is now, the park draws nearly 4 million visitors per year, most of whom come to stay in Yosemite Valley. This is both a blessing and a curse.

I’ve never really spent much time in Yosemite. I came last year during a June trip up to Sequoia National Park. That winter had granted the Sierras about 200% of the normal snow fall, and, following a mid-June heat wave, all of the snow tried to melt at once. As a result, Yosemite’s famous waterfalls were churning out water at a prodigious level, and so the park resembled Disneyland on Memorial Day Weekend. Although I could see that the park deserved its fame, I was not impressed.

Fast forward this year and factor in some adjusted expectations about not experiencing any solitude, and my mind is changed. Yosemite is a spectacular place, if flawed due to development. Consider my hike through the opening of Tenaya Canyon. I hiked through a beautiful glacial canyon with walls towering 6,000 feet overhead. A lush mixed-conifer shaded me from the mid-September feet. However, the trail was littered with horse crap, and I hiked a quarter of the trail on asphalt. Mixed blessings, to be sure.

This hike was a pleasant warm-up that featured good, but not great scenery. I was also looking to test my feet, which had been growing more and more sore over the last month. I’ve self-diagnosed myself with plantar fasciitis, which means that my time of hiking prodigious amounts is coming to a temporary end. However, my feet held up pretty well over the first 6 miles of the trip, which boded well for some of the longer treks I was planning. 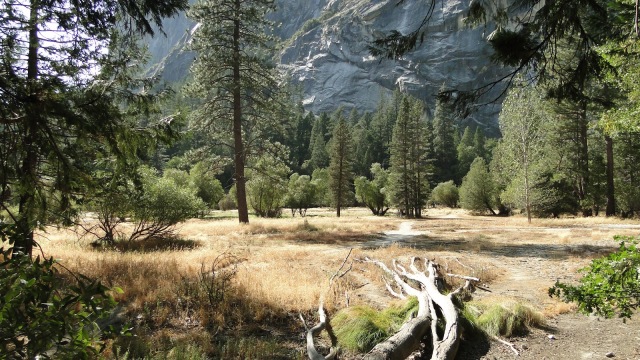 I passed by Mirror Lake (dry) and up the canyon a ways. I passed back through the canyon, past the horse stables, and across a nearby meadow. This is a heavily developed area with three campgrounds that hold upward of 100 sites each, as well as the now infamous tent cabins at Curry Village. To Yosemite’s credit, the area remains largely unspoiled, with a thousand secret beauty spots lurking around every corner. I found solitude even though thousands of people were within a mile or two away at every point of the hike. 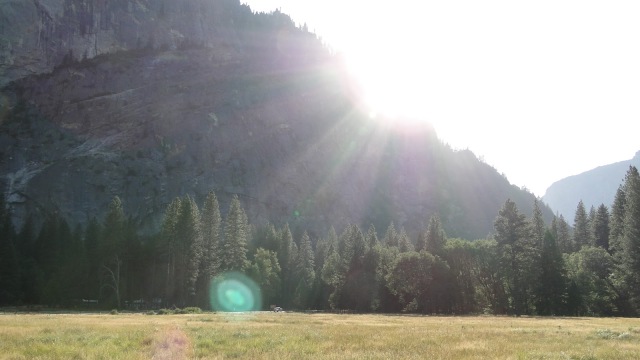 Finally, I made it back and settled in for a nice, but early night with Kelly and her family. Tomorrow would bring an eagerly anticipated and justifiably famous hike through one of the most scenic stretches of Yosemite Valley: the Panorama Trail.