Cons:
– Crowded
– People can be really stupid some times
– We were tired

Our last stops in Yellowstone were geothermal in nature. Recalling a trip to Yellowstone when I was just an embryo, I wanted to stop at the paint pots to fondly reminisce over how much my sister Lisa disliked the sulfurous odors emanating from the muddy hot springs. I didn’t think we’d be going by Fountain Paint Pots, which is the better known and more active site. Instead, we chose to stop briefly at Artist Paint Pots. 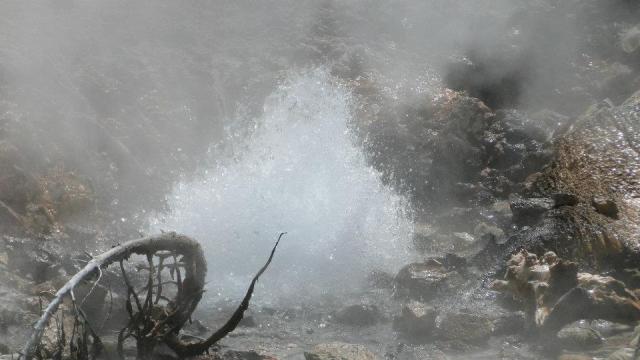 We arrived at Artist Paint Pots feeling tired and ready to get home and have a cocktail on the deck. I figured tacking on a half mile more wouldn’t hurt anything, and so we got out and headed towards some modest geothermal features, of which include a couple of “paint pots.” Paints Pots are called such because there’s a lot of mud in the hot spring, which gives it the appearance of a bubbling, boiling cauldron of paint. There’s not a lot here, and we were too tired to chug up a small hill to see a couple of muddy puddles. Of course, they were more interesting than that, but when you’ve been driving around a hot, crowded national park all day long, everything becomes a muddy puddle. 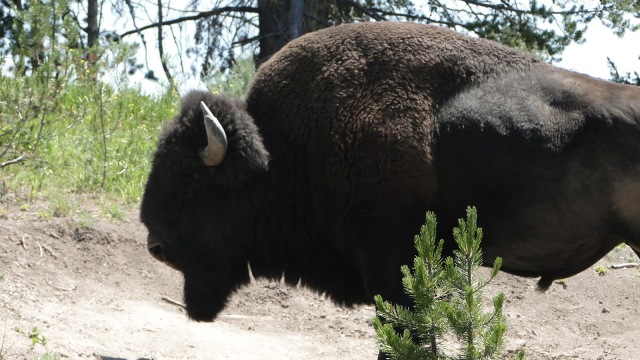 We thought we were about finished, even as we debated a trip to Midway Geyser Basin. We were heading toward Madison Junction, which gives a quick out to the exit, when we came upon a horrendous traffic jam. A line of cars at least a mile long was at a dead stop before us. We figured that there was probably an animal involved and that we’d probably be stopped for a few minutes before things would get going again. 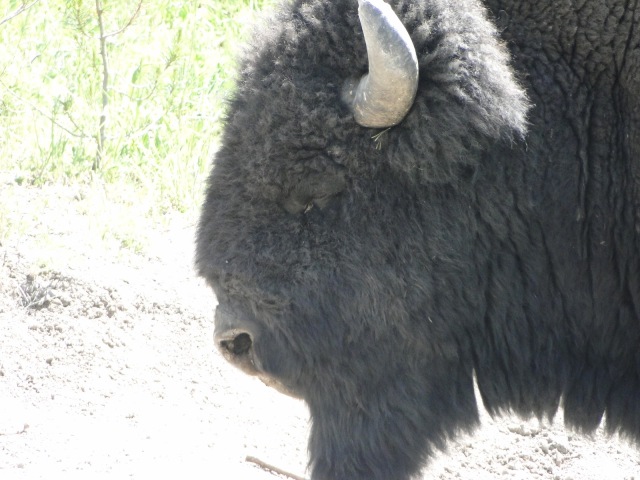 Not so. Thirty minutes later, we figured out what the source of the jam was. Apparently, there were some buffalo in the road, and that the traffic was waiting for them to clear off. We were unprepared for the reality of what “some” means. A number of families had gotten out to walk toward the bison in the hope of getting a good view of some real, honest-to-goodness wildlife. Some of these folks seemed to view the bison as larger, furrier cows, with the same benign stupidity and laziness for which bovines are famous. 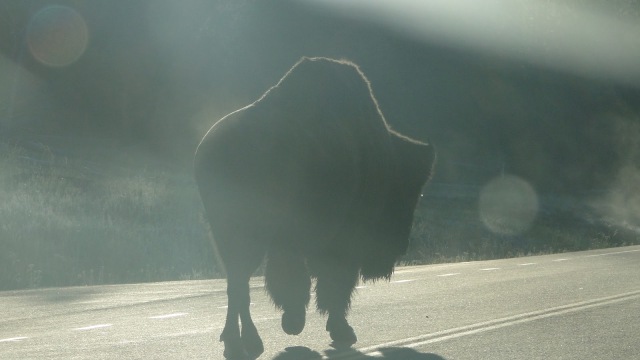 However, bison are not cows, nor are the gentle and lazy. Their temperaments are unpredictable, and they are extremely protective of their young. They can charge at 35 mph, and their heads make excellent battering rams. Pissing off a bison is a stupid thing to do, and yet a number of children got as close as they could to taunt them. The bison feinted a charge, and tense moment, the kids came running back, leaving Kelly and I to wonder where the parents were. CPS, anybody?

Anyhow, the heard passed. 10, 20, 30, 50, 100. Who knows how many, but the heard passed by slowly and unconcernedly with the cars. They knew cars. After all, the road is most likely built on ancient bison trails over which these creatures have traveled for millennia. I’ve never seen so many wild creatures. One of them got within five feet. It was terrifying and exhilirating. 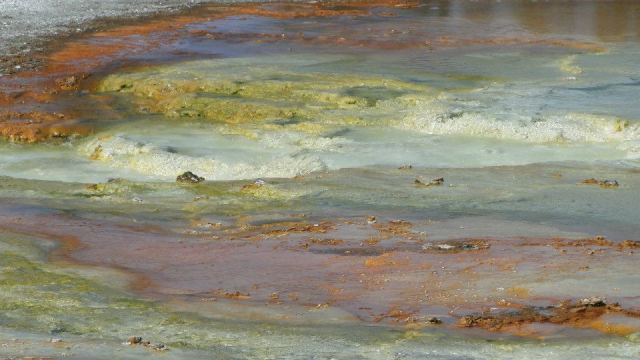 Finally, the herd passed, and we decided that a stop at Grand Prismatic Spring would be in order. It was a quick loop, and the spring is really spectacular. We got out, getting shaded rock star parking in the bargain, and saw exhibit B of human stupidity. 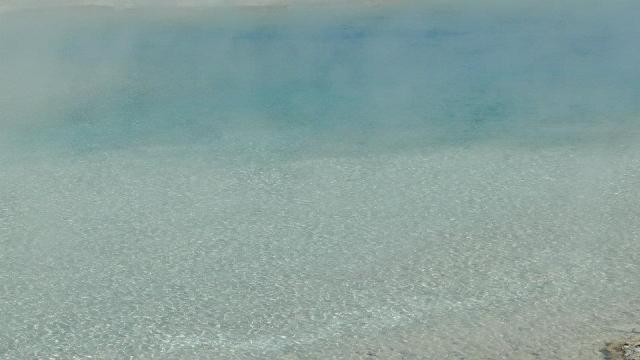 All along the thermal features in Yellowstone are signs depicting a child stepping off a boardwalk and displaying great physical pain after breaking through the surface of the ground and stepping in a hot spring. The ground water below the shallow and fragile crust can be as hot as 400 degrees. In other words, you simply DO NOT STEP OFF THE BOARDWALK. It’s printed in a number of languages, and if that wasn’t enough, the image of a suffering child should do the trick. 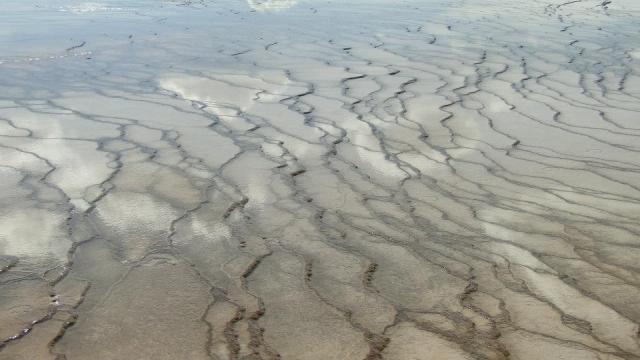 Not so. A couple of tourists had stepped off the boardwalk and walked several yards to get a better shot of themselves in front of Excelsior Geyser, which is really a massive, boiling hot spring. These tourists could have easily stepped in the wrong spot and suffered the fate of a group of park employees who, one night, had a few drinks and decided to go bath in a relatively cool hot spring. They got lost, stepped off the path, and ended up inconveniently boiled to death. Lesson: don’t mess around with Yellowstone. 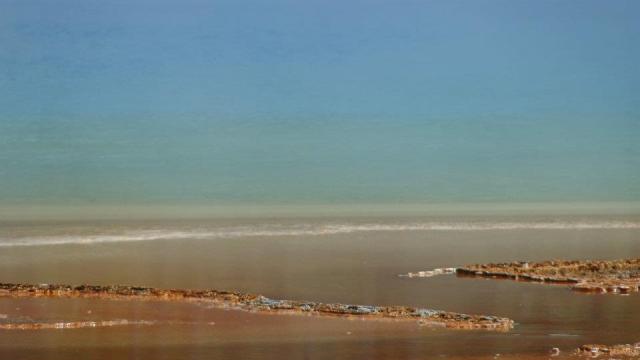 And yet some people don’t learn. As gorgeous as the springs are here, you have to contend with people who are not watching where they are going, even though they are walking along a four foot-wide boardwalk that’s hovering above boiling water. It’s nerve-wracking, and it does detract from the scenery. However, they have a right to be here too, and so tolerance is in order, even though the last thing I want to see is somebody suffer third-degree burns on their lower body simply because they were too stupid to heed a sign. 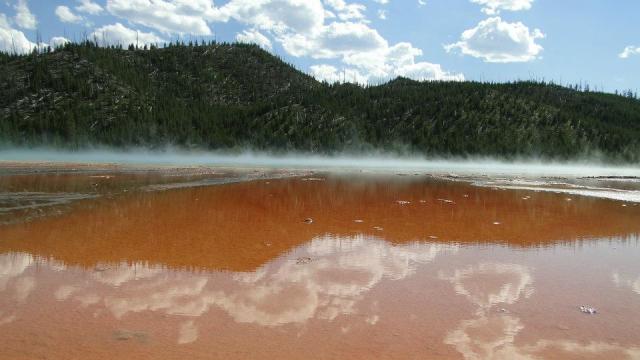 Rant and rave aside, we enjoyed this last segment as long as we could and then high-tailed it back to the cabin where we enjoyed one last dinner and evening with Dave, Doreen, the Gallatin River, and a whole lotta spruce trees. 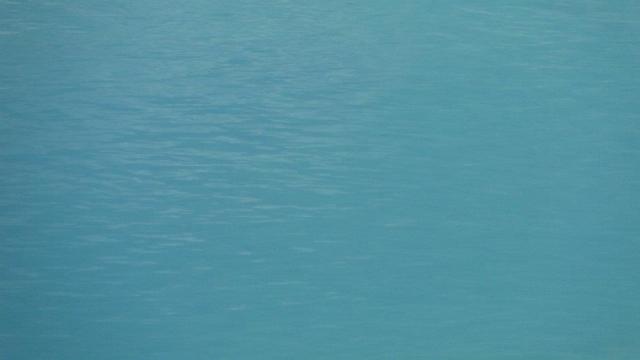 I absolutely loved this trip and hope to go to Montana again as soon as I can. Honestly, I probably wouldn’t return to Yellowstone. It’s an amazing place, but it’s too big, too crowded, and too. . .much. Furthermore, I feel there are bigger fish to fry, particularly with Glacier National Park, Devil’s Tower, and Grand Teton National Park. 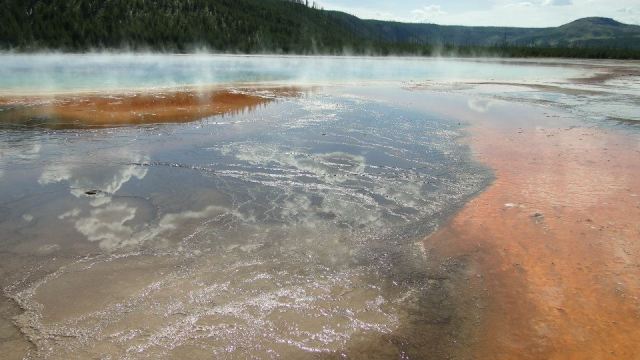