Distance: 18.8
Elevation Gain: 4,100′
Difficulty: Strenuous (but you should call a therapist about that masochistic streak)
Time: 6:50
Critters: A salamander, a gopher snake, hawks, rabbits, squirrels, teenagers.

Pros:
– From a central location in the SoCal area, you can experience epic views of every major mountain range, as well as the entirety of the Los Angeles Basin, Orange County, most of Riverside, and some of San Diego County
– Trail begins and ends with beautiful riparian habitats
– Amusing local history

Cons:
– The long drive down a bumpy dirt road is fine for an all-wheel drive vehicle, but is not much fun in a Honda Civic
– Long stretches of wide-open sun exposure
– The peak is anti-climactic since it is covered with communications arrays 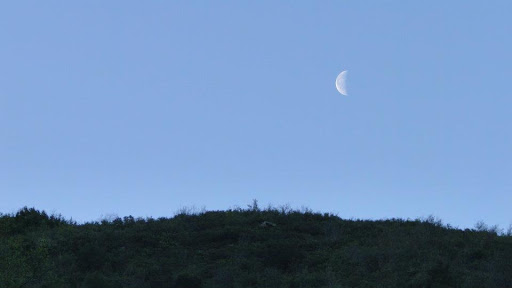 Santiago Peak, also known locally as “Saddleback Mountain,” is a prominent peak rising up from the Santa Ana Mountains, just north and east from Mission Viejo. At 5,689 feet, it is the highest peak in Orange County. It offers a fairly challenging ascent, and the views from the top are pretty great, even if they are marred by all of the communications antennae.

The trail starts at the intersection of Trabuco Canyon Road and the Holy Jim Trail. The first stretch of Holy Jim starts as a well-maintained access road that serves a number of privately owned cabins, some of which are far more rustic than others. You park at the mouth of the Holy Jim Trail – making sure to display your adventure pass, and, once past the cabins about three-quarters of a mile in, the real trailhead appears, revealing a single track that winds through lush riparian woodland.

Along this first stretch of the trail, some signs offer a little info about the colorful history behind this canyon. The canyon is named after “‘Cussin Jim,” although the forest service thought it would be less provocative to use the title “Holy” instead of “‘Cussin.” Jim was an early homesteader who established a cabin, a colony of 100 or so beehives, and an orchard of fig trees. He’d sell his figs and honey in town, presumably peppered with a few F-bombs, to make ends meet, and then spent the rest of his time battling grizzly bears. One particular grizzly, dubbed the “Honey Thief,” destroyed nearly half of his beehives, and so an intensive bearhunt was under way. Hunters tracked the bear for a full month throughout the local canyons, finally killing it only a few miles away. This was the last grizzly in the Santa Ana mountains, and one of the last in all of Southern California. Of course, there are no grizzly bears in California anywhere, presumably because they got between us and our honey. 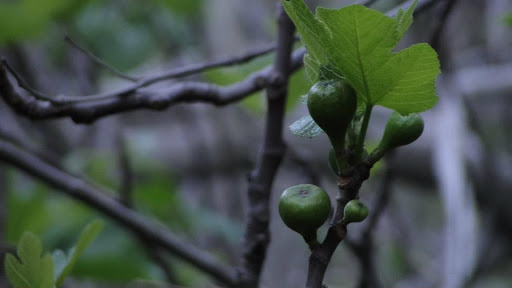 One of the remainders of Jim’s time in the canyon is a profusion of wild fig trees that choke up various parts of Holy Jim Creek. Most of the fig trees were just putting forth new leaves, although a few had some figs growing on them. I imagine if the timing was right, you could nail a pretty fun hike to the falls during the summer and grab a few wild figs on the way out.

So much for history. The trail follows a bend in the hill and comes to a junction. Going right, one can reach cool, shaded Holy Jim Falls, which I saved for the tail-end of my hike. Going left, you begin to switch back up the south face of Holy Jim Canyon for about a mile or so. Eventually, the trail flattens out a bit and contours along the southern flank of Santiago Peak through alternating patches of dense chaparral and riparian woodland dominated by oak, bay, and the occasional Douglas fir.

The trail sweeps around the side of a hill, then emerges into a lovely, but brief forested section along a creek.  Maples, alders, firs, oaks, and pines crowd around this tiny, bubbling creek, making it a great respite from the unrelenting sun you get with chaparral. You climb up a brief hill where, after five miles of hiking, you have reached Main Divide Road.

Main Divide Road follows the crest of the Santa Anas in a generally southeast/northwest direction. You could turn right and follow it down into a saddle where it plunges into some dense-looking fir and pine forest. Or, you can continue left and reach the peak in another three miles. From here, the trail ascends above the canyon, and views begin opening up to the north and northeast. San Jacinto comes into view, followed by San Gorgonio. Hills poke their heads over haze in the distance while the valleys are swallowed up by the atmosphere. Eventually, the trail makes a dramatic switchback, revealing Mt. San Antonio (Baldy), thus giving you a spectacular view of the “Three Saints.”

Finally, after 8 miles of relentless climbing and 4100 feet later, you emerge at the summit. The summit has been gradually rounded off and covered by communications arrays that provide radio and cell service to Orange County. Doubtless, these amenities are necessary, but it is disappointing to work so hard and find your way to a peak only to find that there is no clearly defined peak and that the whole thing is covered in buildings. Ordinarily, the views would be spectacular, but on this day there was a lot of marine layer, so everything toward the ocean was obscured by clouds. The south was clear, though, and I could see Palomar and Cuymaca looming in the distance.

The descent takes slightly more than half the time it takes to ascend. On the way down, I took a brief detour to Holy Jim Falls, which was a lovely, cool respite until the teens started showing up. I wrapped up the hike then and headed out, stopping for a Habit burger, which may or may not have given me food poisoning. 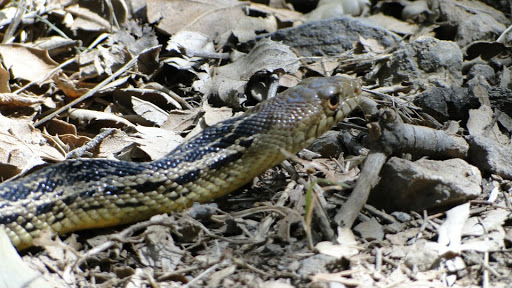 That’s another story, though. I have another peak on the list crossed off, and I enjoyed this one fairly well. I will say though that I am looking forward to some different scenery. The chaparral and woodland terrain is great, but it’s mostly all of what’s available to hike in the cooler months. As Spring really kicks in, I look forward to taking on some of the big boys, starting with Cucamonga Peak and Mt. Baldy in April. I also plan to do a brief backpacking trip into Big Basin Redwoods State Park near Santa Cruz.