I found myself with an hour of leisure time between the moment I dropped my kid off at daycare and the moment I had to be at the office. So, as has become a custom on Tuesdays, I stopped at the Calavera Hills trail network for a quick hike. Normally, I stick to the lake, but given the recent controversy at Carlsbad Highlands Ecological Reserve, wherein the California Department of Fish and Wildlife (CDFW) stated their intention to fine people for illegal use (mountain biking, drones, equestrians), I decided to explore that area a little better.

First, I saw a concrete barrier essentially lining the reserve where it abuts the City of Carlsbad property surrounding the lake. The signage is omnipresent, and it’s abundantly clear that CDFW forbids everything but foot traffic on the reserve. It is literally impossible to draw any other conclusion unless you are willfully ignoring any sign you encounter.

Additionally, I saw evidence of the CDFW’s attempts to make it harder to cut down wooden signs by embedding nails in the wood in order to break saw blades. At least from the perspective of signage, CDFW doesn’t appear to be fooling around.

So, after taking the Solar Trail from Cannon, I cut east on what appears to be one of the few formally established trails (actually an old road bed) in the reserve. As I hiked east, I noticed at least a dozen different trails, all informal single-track, joining the main trail to access the city property or to lead deeper into the reserve. Most of these trails showed evidence of recent mountain bike traffic (I actually saw three mountain bikers on the reserve today), indicating that the local mountain biking community is equally serious about continuing to ride the trails.

Given the abundance of informal trails, it becomes challenging to determine what’s a legal trail and what isn’t. Some of this is on CDFW, as they never formalized a trail plan that would clarify which paths are formal, but a huge amount of that responsibility belongs to mountain bikers who clearly create and maintain these trails. I made it about 1.5 miles into the hike on what I was fairly certain were the proper trails until I attempted to cut back west to Cannon via the water tower. I quickly left the certainty of more established trail and began following a spiders web of single-track trails that clearly receive regular maintenance. 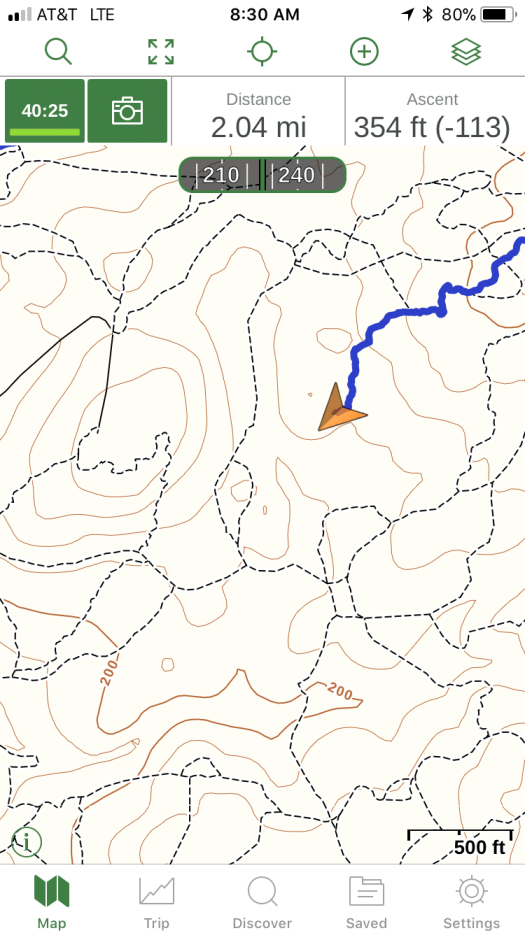 It quickly became impossible to determine what trail I was following. I used Gaia to cross-reference my position against the trails, and I quickly found myself on a trail that does not show up on Gaia (There are at least twice as many trails on the ground compared to what Gaia depicts). That trail soon split into four separate paths, all of which appeared to parallel each other and reconnect via perpendicular connecting trails. Mountain biking tracks were omnipresent, and there were numerous spots where the riders had constructed jumps and other trail features designed to make their ride more exciting.

Take a look at the satellite picture above combined with the Gaia screenshot from the previous paragraph. That ought to give you an idea of just how badly the riding community has carved up an ecological reserve protecting endangered species. Nearly all of the trails I encountered also showed clear signs of recent maintenance. We had an extremely wet winter, and that usually leads to rapid vegetation overgrowth. I saw few signs of overgrowth here.

It’s pretty clear from walking a small portion of the webbing of trails that the mountain biking community has established this as a sort of playground where trail features trump habitat. I get that the mountain biking community feels a sense of ownership since many people were riding these trails prior to 2000 when the CDFW purchased the property. And I get that the theme in North County especially, but also nation wide, is that mountain bikers frequently lose access to properties that they’ve loved.

However, it’s also pretty clear that the reserve’s habitat has been carved up like a Thanksgiving turkey. It’s not hard to see why CDFW has had enough and is attempting to crack down. There’s a prodigious amount of habitat destruction coupled with destruction toward the signage. Mountain bikers like to play the “good stewards” card, but it’s hard to take that seriously when you see what it looks like when they fully take ownership of a trail network.

I really wanted to feel sympathy and support for the riders who are faced with losing access, and to some extent, I assumed this problem could be averted. However, the attitude housed by riders who were “here before CDFW” would still have made it extremely difficult to maintain a more modest trail network that respected the needs of the resident wildlife.

It’s hard to imagine that the land parcel would be in better condition if there was some kind of formal trail plan that includes mountain bikers. Too many of them would likely feel frustrated at losing the existing trails that they’ve obviously created, and given the way some of them have reacted (continuing to ride, chopping down signs, claiming that they won’t respect the closure), it’s reasonable to suspect that, even with a formal trail plan, some riders would go on making illegal trails.

To be fair, I also saw one hiker walking his dog off leash, several piles of horse poop (riding is prohibited), and four plastic bags full of dog crap. It’s not just the bikers, but it’s pretty safe to say that leashless dog walkers aren’t chopping down signs.