Back in the day when I lived in the Conejo Valley, I did an awful lot of ground stomping throughout Pt. Mugu State Park and the adjacent Boney Mountain State Wilderness. Of all the places in the Lands of my People, I think that I love La Jolla Valley’s rippling grasslands, purple and hummingbird sages, coastal views, and cool ocean breezes the most. 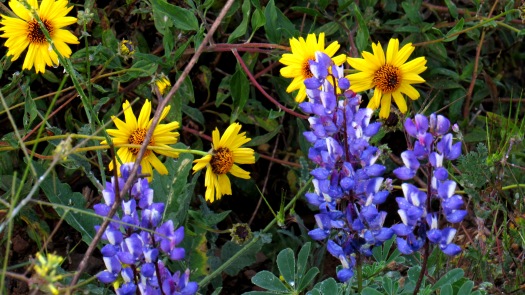 The 2013 Springs Fire swept through the area, incinerating most of the vegetation. A flash flood later wiped out a difficult bit of trail ascending the La Jolla Canyon waterfall. This meant that a crucial access point into the valley is now closed, which added a significant amount of work just to get to the valley. I didn’t see this as a problem, though, since I’m still hard at work at the goal of hiking 175 miles during the month of April.

I got up well before dawn and made the drive out to Pt. Mugu. This drive used to seem like it took forever at 35 minutes, but now compared to the routine 1:30 drives I take to get here and there, it seemed blissfully close. I got there in time for a brief rain shower that served up a warning for what would happen later in the day. I came equipped for the rain with a poncho and trekking poles. I was quite looking forward to a good soaking.

My route started with the Ray Miller Trail’s gentle 2.7 mile switchbacking ascent to the ridge separating La Jolla Canyon and Sycamore Canyon. This is a breathtaking trail, made all the more beautiful by a solid post-fire wildflower display. The area is lagging considerably in rainfall, but that did not stop a vivid display of phacelia, lupine, poppies, bush sunflowers, and mustard from brightening up the skeletal remains of scorched sumac and sage.

The storm was still quite a ways off by the time I reached the Overlook Fire Road. Boney Mountain’s rugged crown lie obscured by clouds, but patches of sunlight splashed across Sycamore Canyon and La Jolla Valley. The rumbling of the waves 1000′ below still reached me, albeit at a much reduced volume. The cool, crisp air washed over me as I strolled on the smooth, relatively flat road. I couldn’t ask for better conditions.

After dropping into La Jolla Valley, I stopped at the backcountry camp. Fire-following vegetation has made a mess of the place, but efforts to clear the brush and restore the camp continue. The actual grasslands of the valley look every bit like they always did. Today, the grass was deep green and knee high. Splashes of yellow and purple from mustard and hyacinth added dashes of color here and there. Most of the valley’s oaks are thoroughly scorched but already show signs of recovery.

By the time I reached the south side of the valley at the base of Mugu Peak, I had some decisions to make. I could not return via the La Jolla Canyon Trail, which meant either walking the 7 miles back along Overlook and Ray Miller. Alternatively, I could climb Mugu Peak, come down the Chumash Trail directly to PCH, and walk back along the highway. This would be a lot shorter, but I don’t like ending a hike on pavement. I settled on the longest possible compromise: bag Mugu Peak AND return via Overlook and Ray Miller.

I made my way up the very steep Mugu Peak Trail while fighting off a calf cramp. I was working on my 37th mile in three days, and my right calf was definitely feeling it. When I finally reached the top, I could not completely fight off a bit of let-down. The summit is well-trampled, obviously from repeated use. There’s a bit of graffiti here and there, and hikers have carved use paths up and down various parts of the top. It appears that a very high volume of hikers come up the Chumash Trail, cut directly up an illegal use trail, and then trample the vegetation. The true Mugu Peak Trail is mostly ignored since it’s more circumspect. The views are admittedly good, but this is clearly a landmark that could use a bit of piece and quiet for a bit.

And that’s about when the rain set in. I was equipped for rain, but I didn’t fancy another 7 miles of hiking back to my car. I opted to return to flat ground by way of the Chumash Trail, from which point I’d head straight back to my car via the shoulder of the highways.

On my way down, I watched a group of hikers in shorts and cotton T-shirts walk up just in time for a heavy downpour. As I made my way down the slippery trail, I saw small children attempt to push their way up the steep muddy slip-and-slide of a trail. Another family of five tried dragging a toddler up the slick, wet Chumash Trail. Another family was towing an old woman, who repeatedly struggled to keep her footing as a small river of water began coursing over the badly eroded trail. People heavily shortcut the Chumash Trail, apparently looking for a straight way down.

When I reached the bottom, I knew that the only way left for me was to walk back along the Highway. Although flat and smooth, the rain was now pounding down, and cars were flying by me at 60 miles per hour with road mist flying up at me. This was definitely not an inspired way to end the hike, and had I had a chance to change my choice, I would have backtracked and dealt with the rain and cold.

Whatever the ending, it was still great to get back on one of my favorite trails.