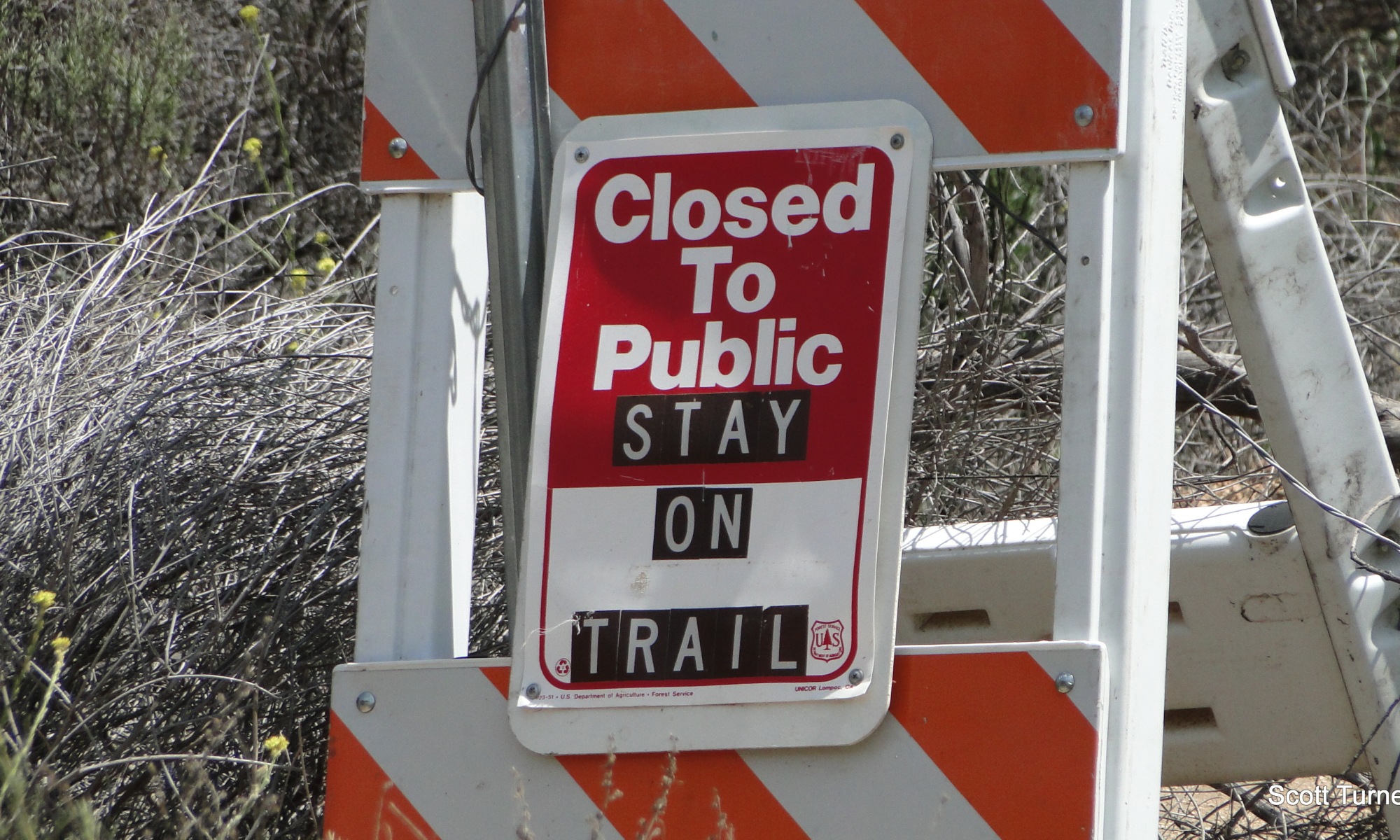 Note: I reference a number of agencies in this piece. I’ve kept the agencies and workers in question anonymous so as not to break confidence.

You’re scrolling through your Instagram over your morning coffee, and you see it: the Goat Canyon Trestle. Some acquaintance you barely know is standing in the middle of the tracks a hundred feet above Goat Canyon on the old wooden structure. The surrounding desert landscape appears vast and expansive. Your acquaintance looks quite pleased with the situation. Something clicks in your mind, and you decide, “I gotta try that.”

You hop on the internet and do a search, and a popular San Diego website shows up telling you all about the tunnels, the miles of pristine desert, the beaten-up, broken-down relicts of a bygone era, and, of course, the trestle itself. You’re sold. You’re going. You gotta check it out.

But wait a minute. It turns out that the train tracks lie on private property owned by the Metropolitan Transit Authority. This includes the trestle. The entirety of the route runs on private property, and even though the enforcement might be inconsistent, there are still penalties and fines for trespassing on the tracks should you get caught. If you hike this route, you’re breaking the law.

There are a lot of people out there for whom the law is secondary to the sort of experience they want to have. They go and hike the trestle hike anyway. The rationalizations they use for doing so are varied, but almost always it is a variation on the theme that when it comes to laws, the good people don’t need them and the bad people don’t obey them, so what use are they anyway? This logic falls apart when it comes to things like incest, child abuse, and physical assault, but I digress. From this perspective, the hiker looking to follow the train tracks to the trestle is disregarding a law that they see as onerous and pointless.

Recently, I met with a group of people in a land management agency to review information I was including in the book. We were discussing a particular location where the agency was looking to expand their trail network. In order to do so, the agency had to secure the rights for an easement wherein the private property owner would allow users onto their property, provided they remained on the trail.

I learned that the private property owner was reluctant to do so since they had had previous bad experiences with hikers trespassing on their property. From their perspective, opening their land to recreational use would increase the number of people who would stray off trail, trespass, and cause more problems. It would damage the habitat, and people would end up off trail and closer to other peoples’ homes. Accordingly, the expansion of the trail network remains in doubt.

The land manager further explained that this is not the first time they were unable to expand their networks or acquire new land due to this attitude from land owners. There had been numerous instances where land owners outright refused to lease or sell their land citing the past behavior of recreational users trespassing on their property. The refusal of some people to follow the rules had scuttled the expansion of several trail networks, thus depriving other users the opportunity to explore new trails.

Paradoxically, the decision to disregard private property laws by hikers led to a further restriction against developing more trails and thus maintaining the amount of land closed to hikers.

Another instance occurred when a separate land management agency had to modify their existing trail network due to people going off trail into places they shouldn’t go. This led to damage to rare and endangered habitats, which necessitated the land management agency to construct a very unappealing set of structures to confine use to the appropriate area. Some people may blame the land managers, but the truth is that the places we visit to recreate are habitats for other creatures, and our misuse of those places causes damage. Today, the trail is vastly diminished because people refused to follow the rules.

And, of course, there’s Mt. San Miguel, which had become a popular local hiking spot for people in Chula Vista. The “trail,” which was never a real trail, “closed” last year following complaints from property owners around the “trailhead” and on top of the mountain. Hikers had been hiking there for years, trampling sensitive habitats, leaving trash, disturbing local residents, and trespassing on the private property belonging to the companies that operate the communication towers.

When the National Wildlife Refuge and the city of Chula Vista enforced what was always a closure, hikers became pretty upset as if their favorite hike had been taken away from them. It was never theirs to begin with, and the entire situation created a good deal of ill will on both sides. Furthermore, I’ve seen the attitude expressed that “who cares if a couple of butterflies get trampled. I want my trails.” This attitude, plus the lengthy history of trespassing and the NWR’s stated mission of protecting wildlife all but ensures that we will never see a trail to the summit of Mt. San Miguel.

You see this sort of thing repeated all over the place. All kinds of users want to see more trails. Mountain bikers want to see single-track trails opened up for their use just as other users report conflict from other bikers who don’t want to follow rules. A small percentage of mountain bikers then go and cut their own trails, create ramps and jumps on protected land, run hikers off the trails with reckless behaviors, and ride their bikes on single-track trails that are closed to them. How will those activities benefit their cause of creating new routes?

New rules and restrictions arise in response to irresponsible use when hikers shortcut, blast their music, or go off trail. These activities undermine efforts to create new trails elsewhere since the already scant budgets go toward fixing the damage elsewhere. Hikers want more trails, but why are land mangers going to rush in and create them when they suspect that hikers are going to misuse them?

I’ve seen the argument bandied about that land managers are cynical cogs in a big government machine who would rather sit on their hands than create new trails for users. This flatly contradicts everything I’ve ever experienced from the people overseeing public lands. Nearly everybody I’ve ever spoken to who is tasked with managing public lands has at least some passion, often abundant, for the places they oversee, works hard to protect those places given the meager resources and bureaucratic restrictions they encounter, and are deeply invested in maintaining the health and vigor of the environment.

Some of these managers have expressed varying degrees of frustration regarding inappropriate use. They put a ton of effort into maintaining trails and then watch a group of hikers shortcut them. They use what little money and manpower they have to try to protect against reckless behavior, when that energy and money could be used to maintain trails. They see people trash the landscape and then listen to them come back and complain that the rules are too onerous. Miraculously, many of these individuals remain deeply committed to their jobs despite encountering these entitled, callous attitudes.

The refusal to follow the rules jeopardizes future trails. Maybe damage or consequences don’t occur every time you break a rule. Sure, you may hike to the trestle and nobody will bat an eyelash. Sure, you may pass through private property to end up at Adobe Falls, and nobody will seem to care. But the cumulative effect of this activity means less money allocated to creating new trails and buying new property. It means more volunteer hours cleaning up trash, fixing trails, and restoring habitat. It means fewer people willing to lease or sell land for new trails. It means habitat destruction that diminishes the outdoor experience for others.

It also means that the actions of a few irresponsible and careless individuals tarnishes the reputation and perception of a group of people who otherwise make every effort to use the land responsibility. Land management policies and the politics behind how trail networks get established are incredibly complex, and the arrangements that lead to new trails can be extremely tenuous. Our behavior jeopardizes or supports that process, depending on how responsibly we approach our use of the land.

We will never have enough trails to explore, but our actions as users go a long way toward determining what we will end up with. At the bare minimum, we must do our best to follow established rules, as all rules serve a purpose even if they seem frustrating or purposeless from the casual hiker’s perspective.

2 Replies to “Why Should I Have to Follow the Rules?”