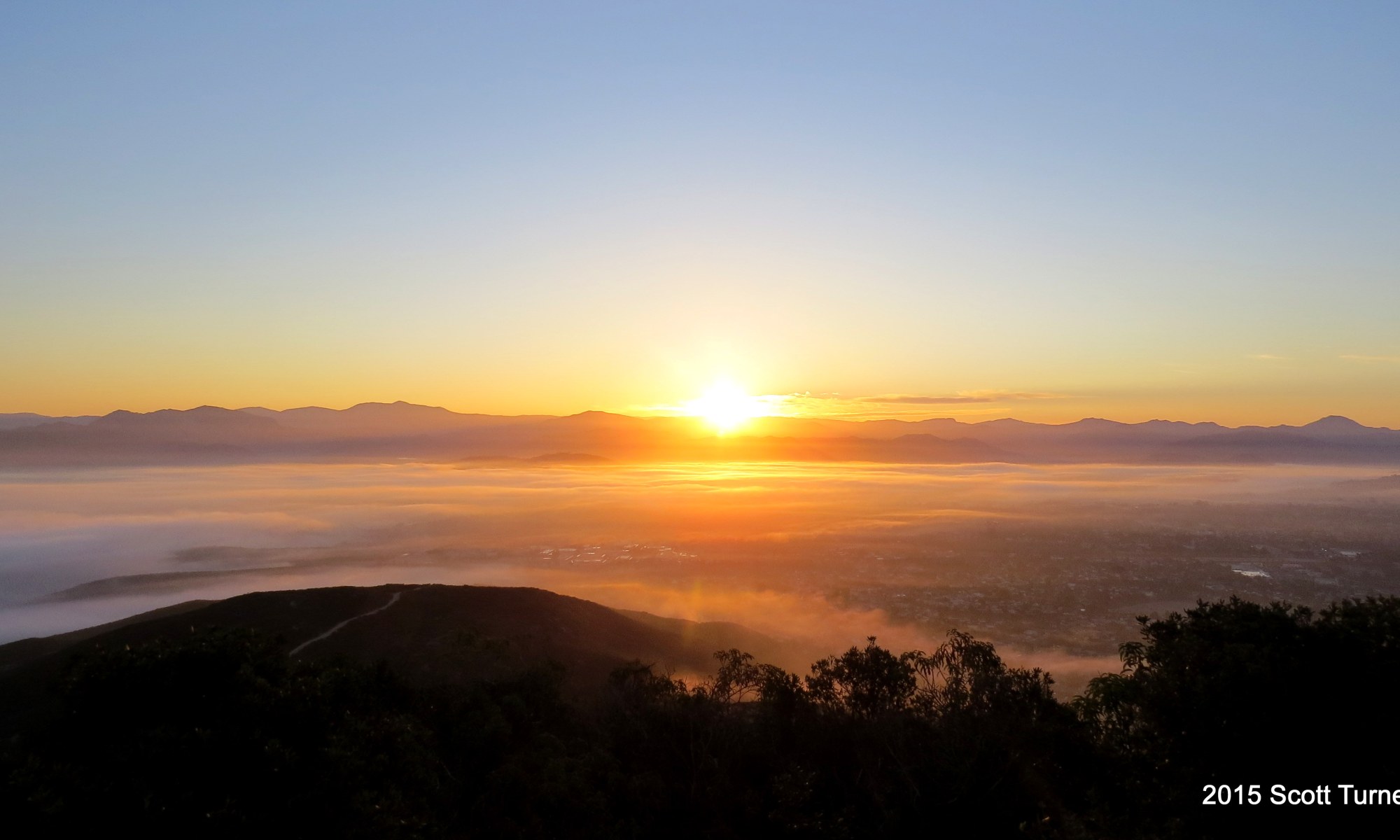 Every year around this time, I like to take stock of what I did throughout the previous 365 days. This year was easily the greatest year of my life as far as hiking is concerned. In addition to taking more new hikes in one year than the past three combined, I surpassed every previous benchmark I’ve set in terms of distance, elevation, time on the trail, and numbers of hikes hiked. I hiked further, climbed higher, got out more often, and spent more time walking than any other year since I started keeping track. This review spells out how – and why – I hiked as much as I did this year.

In early January, I signed a contract to revise and update Jerry Schad’s Afoot and Afield in San Diego. At the time, the publisher pointed out the obvious: “Looks like you’ve got some hiking to do.” Not one to disregard an edict, I hiked 1,328.6 miles, gaining 222,415 feet of elevation over the course of 280 hikes over an estimated 682 hours. I also had the privilege of spending 28 nights outdoors.

To date, I have 25 hikes remaining for Afoot, and when I started I had about 182 to complete.

Every time I do this end-of-the-year thing, I like to do a quick break down of the ten most memorable hikes of the year:

10. Every Step I Took in Giant Forest

I know. Cheating. However, the three days I spent in Giant Forest this year were chock-full of amazing hiking. I saw an incredible sunset from Hanging Rock. I took several long point-to-point rambles utilizing the Giant Forest shuttle. I hit a bunch of trails that I had never seen before, and, even in the midst of a terrible drought, the forest was as beautiful as ever.

This was my first hike of the year and also my best animal sighting. The day before, Southern California experienced an unusually cold winter storm that dropped snow down to the 2,000′ level. I early-birded and thus beat the parade of flat-landers up to Cuyamaca for this somewhat overlooked route around the Sweetwater and along the California Riding and Hiking Trail. Once upon the CRHT, I spooted a gray fox perched on a rock outcrop. For the duration of the hike, I was hiking through 3-12″ worth of pristine snow.

During the course of field work, I was always looking for ways to cluster hikes to kill multiple birds with one stone. On this route, I combined three routes through the Pine Creek Wilderness into a lengthy overnight trip that included wildflowers, bizarre lizards, a trip along a historic flume, a serene afternoon at a watering hole, backpacking in an oak-shaded glen, and a climb into the sun under the base of Corte Madera Mountain.

I led a number of hikes for a number of people/agencies this year, but the most memorable was a hike up to Monument Peak that I led for Modern Hiker’s crowd-funding campaign. In addition to the, um, monumental views from the top, we watched the sun sink into the ocean on an exceptionally clear evening, then turned around to watch the moon rise out of Anza-Borrego Desert. Combine this with some wonderful company, beers at the Pine House Tavern, and camping at Burnt Rancheria that night with my wife, and it’s a night to remember. 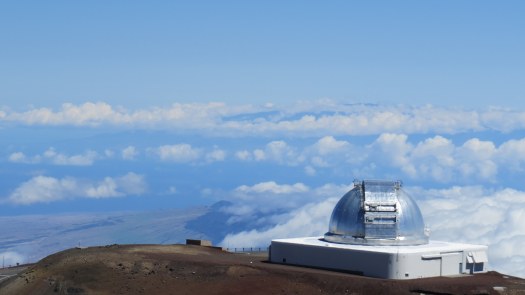 Mars-scapes, alpine lakes, and snow banks aren’t what you’d typically associate with the tropics, but I got a dose of all three on this very challenging and very scenic odyssey to the summit of Hawai’i’s highest point. Mauna Kea (“white mountain” in Hawaiian) rises over 30,000′ from the ocean floor, making it the world’s tallest mountain. It regularly receives snow during the winter and spring, and the observatory on top takes advantage of remarkably clear air to observe the heavens. Incredibly, I worse four layers of clothing and sunscreen, and I still ended up with a sunburn.

I joined Shawnte Sallabert and Pamela Zoolalian for a three day trip along the PCT. We undertook the venture to conduct combined fieldwork for my book and for Shawnte’s upcoming Pacific Crest Trail section hiking guide. We watched sunsets, moonrises, scaled peaks, observed gaping chasms, camped in canyons and among dinosaur eggs, witnessed a search and rescue operation, and gabbed our way through 45 miles of trail. However, the trail will forever be summed up in one immortal word: Caaarrrrrrl? 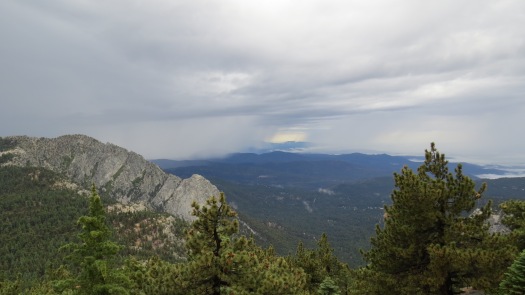 In the middle of July, a dip in the jet stream picked up the remnants of Hurricane Dolores and threw them headlong against the Southern California coast. Much of Southern California experienced record rainfall, and many locations broke their monthly records in the space of a couple of hours. Sounds like a good day to try to climb the region’s second highest peak, right? Climb it we did, as I led a group of hikers up to the top through torrential rain, bitter cold, and one almighty thunderclap that propelled us down the mountain in record time. The experience was as sublime as it was miserable.

This hike was a perfect storm of awesome. It represented my first attempt at climbing what had been up to this point an intimidating desert peak. I experienced a perfect mix of desert habitats, including palms, waterfalls, ridgelines, a variety of biotic zones, and those endless Borrego Valley views. And, I got to enjoy the company of the eminently knowledgeable Don Endicott, who has been a huge source of support and a congenial hiking companion on a number of hikes this year. Bonus points for watching a trio of gonzo trail runners flying up Indianhead’s south ridge.

The hardest hike of the year was also one of the most spectacular. There is no easy way to get to Rabbit, and every route accumulates over 6000′ of elevation gain in no less than 13-14 miles. The route I took brought me up the Santa Rosa crest via Villager Peak. I camped up on Villager Peak and witnessed the Trident missile test launch that captivated the Western U.S. for a day. I watched the sun set over the Borrego Valley while watching the sun rise over the Salton Sea. I summitted Rabbit Peak just past dawn and stood on one of the most isolated sky islands in the region.

Due to the book, I didn’t spend as much time in the Sierra as I normally do, but the time I did spend was exceptional. For this 4-day backpacking, my oldest and best friend Tony and I followed the Rae Lakes Loop through some of the most exceptional Sierran landscapes. We camped along a fogged-in Middle Rae Lake, camped along a serene meadow, busted some serious balls, and enjoyed the benefits of a life-long friendship.

This was by far the best year of hiking I’ve ever done. With some of the things that I’m working on for the next year, it could continue to get better and better. Here are my goals for 2016: