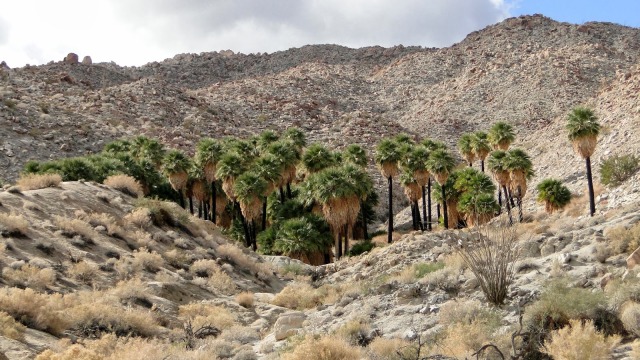 While you wouldn’t know it based on urban development together with beautifully manicured and shady trees throughout the city and suburbs, Los Angeles and San Diego were once largely treeless. The wide, rolling coastal plains were covered by grasses and sage-scrub with punctuation by riparian habitats supporting oaks, willows, and sycamores. Unless you went into the mountains, there were relatively few trees to be found. Drive through the city today, and you’ll see a vast assortment of trees, including pines, liquidambers, jacarandas, magnolias, olive, sycamores, and eucalypts. None of these trees, save the sycamore, are native to Southern California, but since they tend to thrive in a variety of environments, they have taken root and created a fairly substantial urban forest. You may not always notice it, but the cities are full of trees.
Ironically, the most recognizable symbol of Southern California is an imported ornamental that came from California and Mexico’s own desert back yards. While there are a few imported palms from the tropics, which is the main habitat for palm species, the most visible and recognizable trees in Los Angeles and San Diego are the fan palms from Southern and Baja California. Most frequently, the famous tall, skinny palms towering over the city streets is the nearly identical Mexican fan palm. However, the California fan palm has been planted in numerous areas, and like many endangered animal species, it is now more prevalent in manufactured environments than its own natural environment.

The California fan palm has been in its current form for 50 to 70 million years, and its fossilized ancestors have been found as far north and west as Colorado. Around that time, much of the western United States was tropical, with the low-lying areas covered in warm, shallow seas and tropical vegetation persisting throughout the region. Over the millions of years to follow, the climate eventually dried in this region, leading most of the old tropical species to die off or shrink into isolated pockets with vastly different forms. The California fan palm still remains as a tropical relict contained in isolated pockets of the brutally arid Mojave and Colorado deserts.

The fan palm persists because there are numerous springs throughout the desert. A spring is a site where underground sources of water called aquifers come close enough to the surface to begin seeping or even flowing over the ground. While most of the desert is arid and supports xeric (drought-tolerant) plant species, the immediate area around the spring can support a wide variety of plant life, including grasses, willows, and, of course, palm trees. Some of the town names in the SoCal desert, such as Palm Springs, Borrego Springs, Desert Hot Springs, Palm Desert, and 29 Palms reflect these natural occurrences. Palm oases can be found in and around all of these locales. 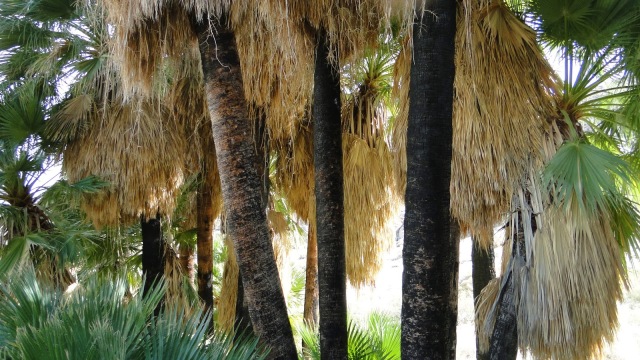 These palm oases provide habitats for a number of different bird, snake, rodent, frog, and insect species, as well as larger animals such as coyotes, cougars, and bighorn sheep. The palm fronds wilt and turn downward, creating a “skirt” in which a number of animals live in a specialized microclimate. In Spanish, the bighorn sheep is called “Borrego,” which is where Anza-Borrego and Borrego Springs derive parts of their names. Borregos congregate around the oases for their water before they resume their rocky hopping acrobatics. The combination of surface water along with food and shelter provided by the palms creates diverse and vital habitats for animals that would otherwise struggle to survive in a place where water is frequently non-existent.

It is this presence of water that allows a tropical species to continue to survive and thrive in the desert. However, the desert also makes the fan palms vulnerable. As irrigation in places like the Imperial Valley and Coachella Valley tap water from underground aquifers, the water table recedes and oases begin to dry up, killing the palms and destroying the habitats. The palms are also susceptible as so many other trees are to bark-boring beetles, which get into the wood of the tree and prevent water from reaching the surface. Fire can occasionally wipe out a grove, as it does to so many other trees.
Ironically, the palm that is most likely to see its days number is not the native fan palms growing in desert oases. These palms will likely continue to survive in the protected regions of the desert, such as Joshua Tree, Mojave Preserve, and Anza-Borrego. The palms most likely to vanish are the ornamentals in Los Angeles and San Diego Counties. Many of the palms planted in Los Angeles were planted to beautify the city in anticipation of the 1932 Summer Olympics. Many of these trees are nearing the ends of their natural lives and will soon need to be replaced. However, palms are not particularly good at trapping the pollution created by the city, so instead of being replaced by younger palms, they are being replaced by other broadleaf trees and conifers which will trap the pollution. Although the palms will never entirely disappear from the urban landscape, it’s possible that the famous palms of Los Angeles will one day recede into memory.