In the upper regions of the two highest ranges in California, two closely related trees exist in isolated remnant pockets. These trees are famed for their longevity, with one, the Great Basin bristlecone pine, known to live up to 5,000 years. It’s younger cousin, the foxtail pine, has been known to live up to 3,000 years. Both trees attain gnarled, contorted appearances and look very similar, save for the especially contorted bristlecones in the Methuselah Grove. Due to their extremely inhospitable environments, these ice age holdovers have adopted a number of different strategies that have allowed them to survive the elements for eons.
The bristlecone pine grows in isolated groves just below tree line in the Inyo and White Mountains east of Owens Valley. Paradoxically, these trees live longest where the conditions are most difficult. In shady slopes that hold moisture, or in areas where the soil is favorable, the tree is susceptible to disease or pest, and although it appears more like a classic pine tree, it usually succumbs to some kind of fate as it does not develop the same defenses that trees in inhospitable areas develop. 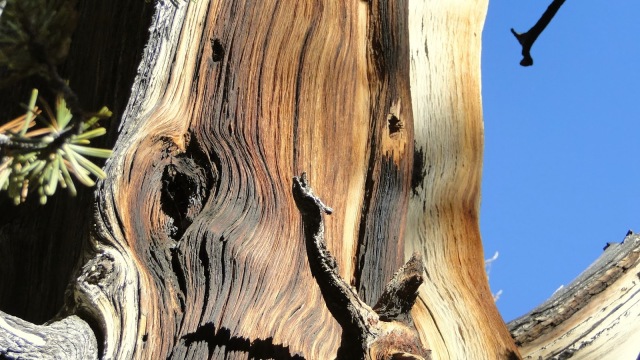 Bristlecones growing on alkaline dolomitic soils and exposed directly to sun to tend to grow at a microscopic rate. While most pine trees shed their needles every 5 to 6 years, bristlecones shed their needles about every 40 years. Additionally, the bark of the tree is hard and resinous, making it resistant to pests. The wood is so strong that, rather than rot after the tree’s death, it will erode due to natural forces in much the same way as a stone. This wood takes so long to erode that scientists have been able to trace back three generations of these trees through living, dead, and decomposing trees to the ice age. As such, bristlecones provide evidence through growth and chemical composition of how climate changes over time. 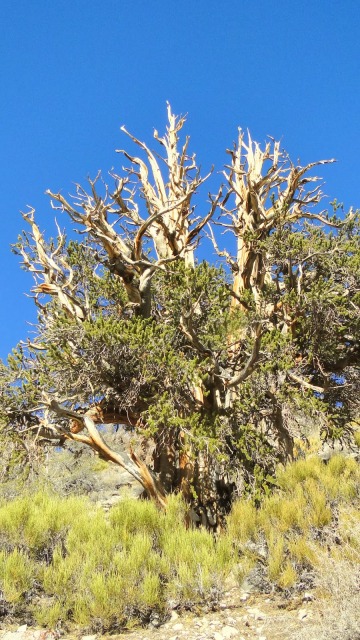 Bristlecone pines also tend to be extremely conservative. If a part of the tree is not receiving adequate moisture, the tree allows it do die. As a result, many trees look to be mostly dead, even if there are still needles on one portion of the tree. This happens because the bristlecone can stay alive even with one relatively small strip of bark, even if the rest of the tree is dead. As a result, a mostly dead tree may contain several branches containing foliage, indicating that it is far from dead. 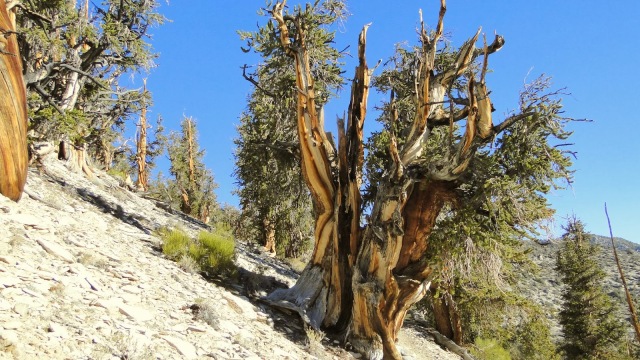 Bristlecone pines have an extremely low reproductive rate owing to the inhospitable climate and the slow growth of the tree. It is believed that the tree will eventually become extinct, as its range shrinks and the climate becomes less favorable. While the species is vulnerable, it still could be several thousands, perhaps even ten thousand, before the tree disappears entirely, given its extreme old age.
The bristlecone’s younger, but frequently larger, cousin is the foxtail pine. In most respects, the trees look very similar, with the foxtail occasionally taking on a similarly gnarled appearance. The foliage is nearly identical, but the foxtail has a reddish bark in a rough, checkerboard formation, while bristlecones have a greyish bark, where they have bark at all. The foxtail has similarly shaped and sized cones, although it lacks the bristles that give the bristlecone its name. The easiest way to tell the trees apart, however, is to remember where you are standing. Foxtails grow in the Sierras, while bristlecones grow in the Inyo and White Mountains. The ranges are separated by the Owens Valley, thousands of feet below. 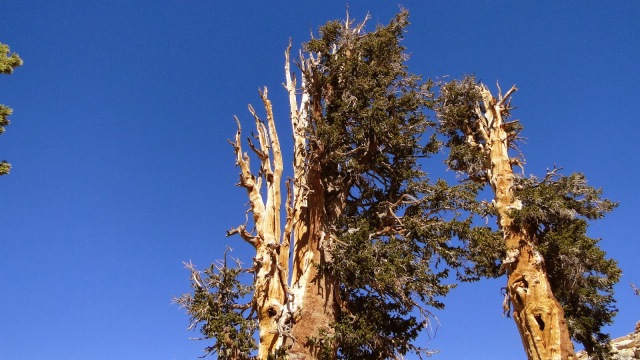 This geographical separation provides an example of evolution at work. These trees were likely much more prevalent during the prehistoric ice ages, where their range might have dipped far into the lower elevations. One parent tree may have covered the Owens Valley and extended up into the slopes of the Sierras and Inyos. As the climate warmed, the trees retreated up slope, continuing to chase their preferred climate. The ice age still exists at the highest elevations of these ranges, and so small pockets of the trees maintain a foothold. However, while they are very similar trees, they are distinct species, which is the result of hundreds of thousands, perhaps millions of years of adaptation to relatively different environments. 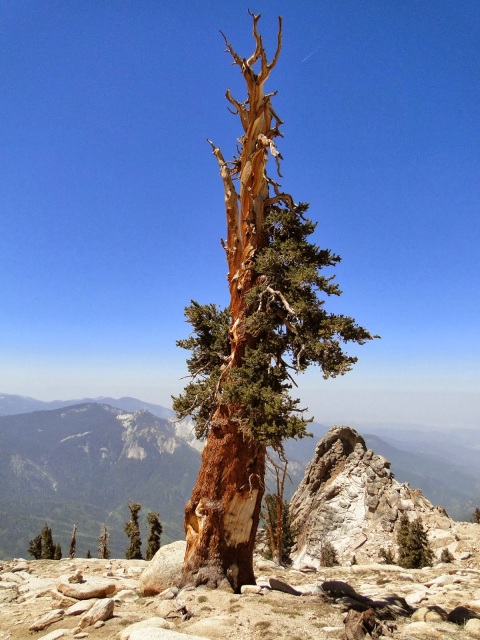 Foxtail pines inhabit wetter, more hospitable climates and therefore grow larger but live shorter lives. Bristlecones inhabit dryer, less hospitable climates, therefore remaining smaller, but becoming much hardier. Both trees achieve amazing longevity to the point where one must do a double take when realizing that, even though both trees have outlived the emergence of Jesus Christ as a historical figure, some bristlecones were actually 2,000 to 3,000 years old at the time when Christ was reported to be born. The oldest known foxtails would have been saplings at this time. 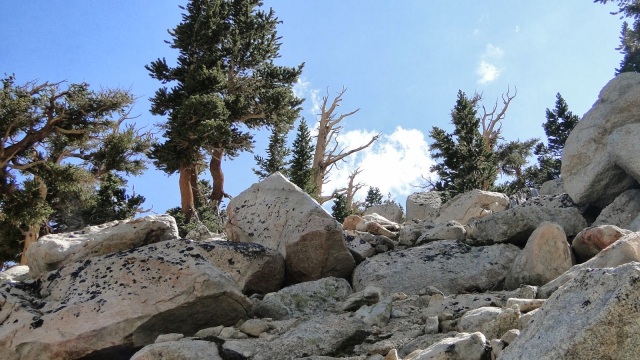 The age of these trees challenges the imagination. Some bristlecones have survived the length of 600 to 700 human lifetimes. They have survived numerous civilizations, and may even pre-date Greece, which indicates they also pre-date our religions, our philosophies, our math, and our oldest technologies. They will likely survive us, even though it’s unlikely they will do so indefinitely. However, finite for these trees could still mean thousands of years.
Advertisement

One Reply to “Relict Species: Foxtail and Bristlecone Pines”