The North Rim of the Grand Canyon receives more precipitation, fewer visitors, and remains less developed than the more popular South Rim. Relative difficulty of access is the main culprit as the North Rim features marvels that equal, and in some instances exceed, those of the South Rim. Driving there is one thing; the hike to the North Rim from the canyon’s interior may be one of the most spectacular hikes in the United States. 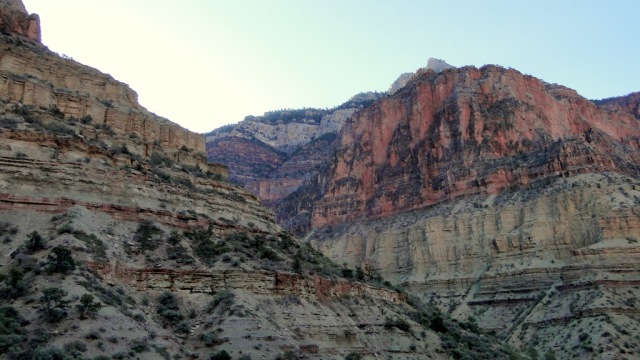 I consider myself fortunate enough to have taken some pretty brilliant hikes. I climbed Mt. Whitney, starting out at 3 am under the remnants of a meteor shower and watched the sunrise from a perch 13,600′ above sea level. I watched the sunrise over Haleakala Crater and then proceeded to walk across the very same crater. I hiked up the towering cliffs of Zion Canyon through the snow and enjoyed endless views over Zion Canyon. I snowshoed through Giant Forest in the midst of icy silence. Those have been some of the most memorable outdoor experiences of my life. I can now add another to the list.

In a place so crammed full of extremes and superlatives as the Grand Canyon, it may be tough to say what the best hike is. That may ultimately be a subjective experience predicated upon personal preferences. However, if I had to tag an essential hike that gives the most incredible experience possible, it would be, hands down, the hike to the North Rim from Cottonwood Campground. This 17 mile epic encompasses some of the most spectacular, awe-inspiring scenery you can find anywhere in this country on a trail that often defies reason and occasionally defies belief.

The North Kaibab trail begins in the midst of stark desert, through pinyon-juniper woodland, and ends in a forest of pines, spruces, and aspens. The trail crosses through multiple formations of sedimentary rock, each with a different color, composition, consistency, quality, and story. The trails clings precariously to the side of a cliff that drops vertiginously over a sheer thousand foot cliff. Powerful natural springs cascade loudly from the side of a massive butte, aggressively carving out steep, colorful canyons.

Photography makes a sense of scale impossible to achieve. It’s impossible to really capture just how massive everything is here. While the South Rim is about wide, sweeping views of towering buttes, the North Rim is vertical in nature, and the scenery centers of the imposing, the vertical, and the hiker’s sheer sense of smallness. Most times on a hike, the sense of the place sinks in, and the hiker ceases to be overwhelmed by wonders, instead falling into a rhythm that approximates “being a part of” the place. At the North Rim, there is no getting used to it. With every step comes the constant reminder of just how massive this place is and just how small you are.

And yet, many of the charms of this part of the canyon come with the small details. The junipers on this side seem more abundant and more twisted. The trail transitions through numerous areas of wildflower growth. When not distracted by the topography, one can enjoy the subtlety of the rocks and the flora transitioning. Scrub becomes woodland, which then becomes a rich, mixed-conifer forest. The hike is as rich in detail as it is in grandeur.

So, all this flowery prose aside, here’s how it goes. We started out at a reasonable hour – say 7 or 8, although I stopped keeping track of time. We climbed gradually to the pumphouse residence, which is where engineers have constructed facilities to harness the water flowing from Roaring Spring. The water that the canyon uses for drinking comes from this source, which consists of multiple springs cascading spectacularly from a cliff-side. The pumphouse features the first floral transition as scrub gives way to Utah juniper and pinyon pine.

From Roaring Spring, the trail turns northwest into Roaring Spring Canyon, leaving views of the main canyon behind. Roaring Spring Canyon is narrow and deep. The upper regions are composed of easily eroded red sandstones, which form the vertical cliffs that give the canyon such an imposing appearance. The trail hugs these cliffs for the second third of the ascent, crossing frequently through massive grottos and hugging cliff-sides. 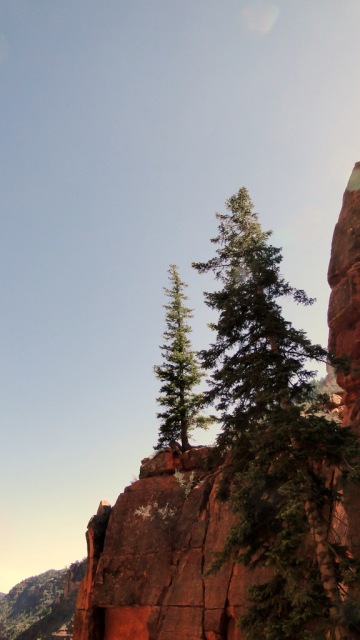 The scenery begins to change upon reaching Supai Tunnel. On the other side of the tunnel, which had nearly caved in, the pinyon-juniper woodland begins to transition into forest in earnest. As the trail climbs, the forest becomes denser and more varied, just as the weather begins to cool. There’s a great place to stop and rest beneath the shade of a Ponderosa Pine at Coconino Overlook, which reveals the deep, almost linear gash of Roaring Springs Canyon below. This is a great place to reward yourself with evidence of all the progress you’ve made. 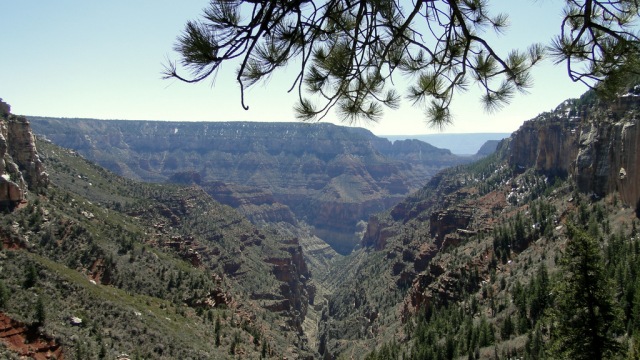 After this, the trail continues to swtichback upward until aspens and spruces begin appearing. The top layer of rock becomes more and more visible and attainable, and, almost suddenly, the North Kaibab Trailhead appears. As you step over the threshold, the “Towering Canyon” scene is completely replaced by a full-fledged, honest-to-goodness forest. From spines to pines in about 8 miles.

Patches of snow still clung to the ground, and the North Rim was almost entirely deserted save for a construction crew and another hiker whose path I crossed. Kyle remained at the trailhead for lunch, but I was determined to carry on to the Grand Canyon Lodge, where I could look back at the canyon I had just finished crossing. The crossing through the forest was mercifully flat and cool, and after a quick 1.7 miles, I found myself enjoying my lunch at the silent and vacant Grand Canyon Lodge, overlooking the entirety of the Grand Canyon.

There are two fun characters I want to pay homage to briefly. The first was Katie, a hiker from Ottawa who was dayhiking the North Rim from Bright Angel Campground. This trek is 28 miles and features a gain of almost 6,000′. That is a hike that ventures quickly into “bad ass,” and I tip my hat in major respect to what she did. What Kyle and I did was enough of a challenge. What Katie pulled off was very impressive.

But perhaps not as impressive as the second character. On the way down, I crossed paths with an older gentleman, who was probably in his 60’s. He asked me how long to the next landmark, and I gave him my best estimate. Later, when I ran into Katie again at the other side of the canyon, she told me more about this guy. Apparently, Katie had been unable to get to sleep, and as she was enjoying the night sky and listening to music, a headlight came bobbing through the campground at 12:30 am. She talked to him, and it turned out to be the very same person I had crossed paths with and with whom she had crossed paths as well. This guy was day-hiking the entire Grand Canyon at a very slow pace. He had no camping permit, and he was just making his way there and back at a slow, measured pace. He had stopped for a few naps, but was just going to keep on going until he got out. Phenomenal. There are some really amazing people out there, and quite often, you come across them on places as amazing as this. 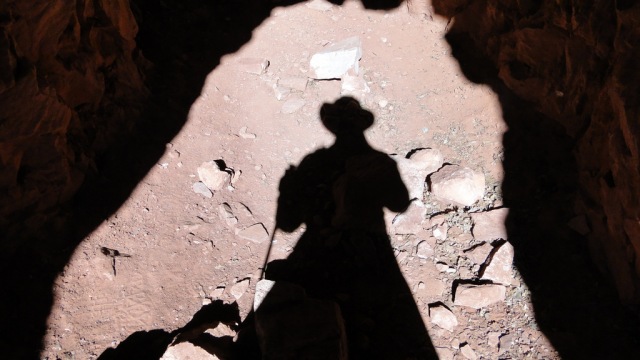