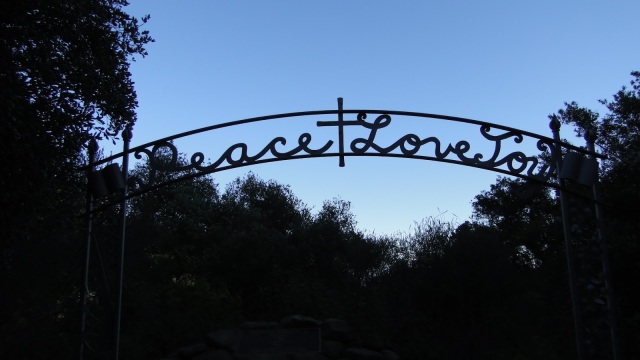 I don’t know a whole lot about who Richard Ely Danielsen was. I understand that he once owned the land upon which this state park sits. I know that he once had a cabin, of which all that remains is a foundation and a chimney. I also know that he was buried about halfway up Boney Mountain at one of the loveliest spots in all of the Santa Monicas. While Danielsen Monument is a great halfway spot for the frontal assault on Boney Mountain, the actual monument and cabin site is a great hiking destination for anybody looking for something more moderate. 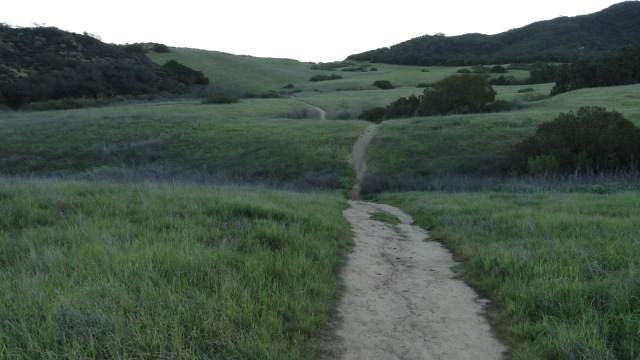 The trails in this area have long been some of my favorite for hiking, and in this sense this was a nostalgia hike. The rolling green hillsides of Satwiwa look a lot like the Shire when green due to the gently swelling plains covered in swaying green grass, all dotted with oak trees. Boney Mountain itself was an object of fascination for years, and it was one of the first “tough” hikes I ever took, which was in response to challenges from an old co-worker who used to run the damn thing from top to bottom.

By piecing together a string of different trails through this portion of three different parks, one can take in both the rolling hills of Satwiwa, dramatic Upper Sycamore Canyon (plus waterfall), as well as the lower flanks of Boney and the monument. The bottom of the canyon, with its gnarled old coast live oaks and swaying sycamores, is a lovely respite in warm weather, and the waterfall, when running, is a cool, shaded oasis. 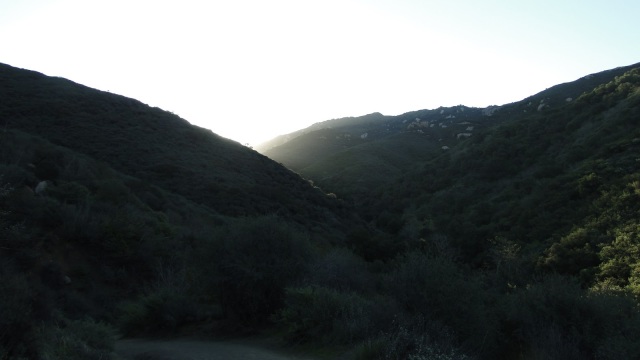 After cutting across Satwiwa, you either ascend from the windmill up a hill or descend across the meadow to the north edge of Sycamore Canyon. From here, you descend via fire road to the bottom, where you can follow the stream down toward the main stretch of Sycamore Canyon, or you can turn upward to the south wall of the canyon. Following the south wall route, you switchback up a good 600-700′. This section is a little strenuous (I could barely finish it when I was younger and less interested in hiking), but the views become more and more rewarding as you go. 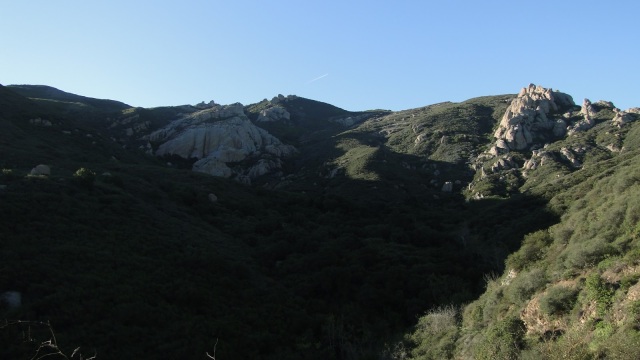 As you round the corner, you are greeted with one of the finest sights in all of the Santa Monicas. The northern crags of Boney Mountain jut out from the chaparral over the uppermost reaches of Sycamore Canyon. The monument lies at the headwaters of Sycamore Creek, and at this spot, one can spent a good ten minutes to cool down or several long hours reading a book or taking a nap. I’ve done all three at one point or another.

From here, there are a number of options. You can descend to the bottom of Upper Sycamore Canyon. You can ascend to the north summits of Boney. You can soldier on past Boney along the old footpath over to the caves at Tri Peaks. You can follow the Old Boney Trail to the Fossil Trail and then down to Sycamore Canyon. If you’re a real adventurer, you can climb Boney, cross the plateau, descend on the Chamberlain Trail into Serrano Valley and then wind up at the sea. This is a great network of trails, and the options are pretty much unlimited.