Cypress Gardens is a small nature preserve/plantation/heritage center/swamparium/etc., etc. located about a half hour from Charleston. The small network of trails allows the wanderer to explore a lovely patch of swamp, as well as some dense forest, plantation sites, butterfly exhibit, swamparium, and numerous buildings and exhibits nearby.

With a couple of hours left-over from wedding festivities, Kelly and I decided to see some more of the natural side of South Carolina. For a long time, I’ve been intrigued by the swamps of the south, with their cypresses, standing water, massive reptiles lurking below the surface, and Spanish moss swaying in the breeze. I attempted to visit such a place in New Orleans once, but I ended up getting in a car wreck that precipitated a trip back to California before the trip. Just so you know, people in the south are not particularly good drivers. But then again, you could say the same for Californians.

For a $10 fee, you get access to everything that this diminutive park has to offer. We only stopped at a couple of the exhibits, beginning with the heated butterfly enclosure. Here, we found a number of gorgeous butterflies, quail, ducks, and turtles enjoying the warmth and generous amounts of bug and bird food available. It was a welcome respite from the cold temperatures, which were still hovering in the 40’s and gaining an assist from the wind.

Soon after, we ventured out onto the 3.5 mile network of walking trails that criss-cross the swamp. Numerous signs are happy to warn you that alligators, which get much larger than you expect, can be encountered at any time. That puts an edge on what should be a simple stroll. It also puts into perspective the relative safety of hiking in Southern California, where the mountain lions are rare and shy, and bears are more interested in getting up a nearby tree than messing with hikers. Gators are nasty looking things, more suggestive of dinosaurs than modern beasts. 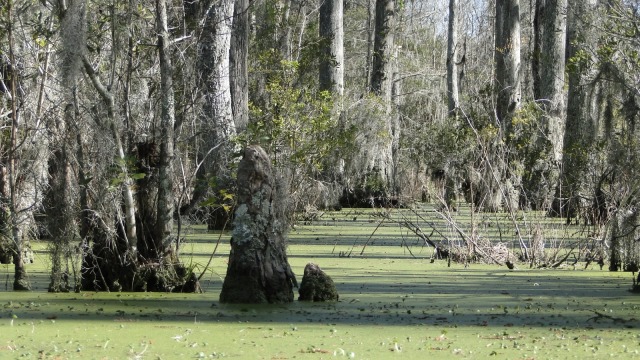 Alas, no alligators were encountered outside of the swamparium. Instead, we strolled through classic-looking swamps, which support a large forest of Bald Cypress, a deciduous relative of redwoods that thrive in stagnating water. These cypresses shed their leaves during winter, which is unusual for conifers. Also unusual is the presence of “Cypress Knees,” which are woody projections that stand apart from the cypresses and rise up from their root systems. Nobody is really certain what these knees do. Some speculate that they help the trees breath in the swamp water. A more plausible theory is that they help anchor the trees in the soggy soil.

Along the way, we encountered a number of gazebos that set backdrops for wedding ceremonies. We saw a lot of flowering trees, an old grave site, and a lovely swing that allowed us to soak in some peaceful moments while viewing the swamp, as well listening to the birds singing and the wind chimes chiming.

I’m so glad I finally got a chance to enjoy the swamp. A swamp is about as alien to a Southern California as the tundra, since water this abundant only exists in the ocean. Here, you’ll find water everywhere you look. There is so much of it that most of the land lies beneath it. We live in a desert, and thus places so verdant and abundant in plant life are source of fascination and mystery.