Whale Peak stands as a botanical island in the sky amidst the scorched, barren wastelands of the Anza-Borrego desert. Representing the high point of the Vallecito Mountains, Whale Peak supports a thriving pinyon-juniper woodland, which is more common to the higher elevations of the Mojave Desert and eastern sides of the Sierra Nevadas. Flora aside, Whale Peak boasts stunning views in every direction. 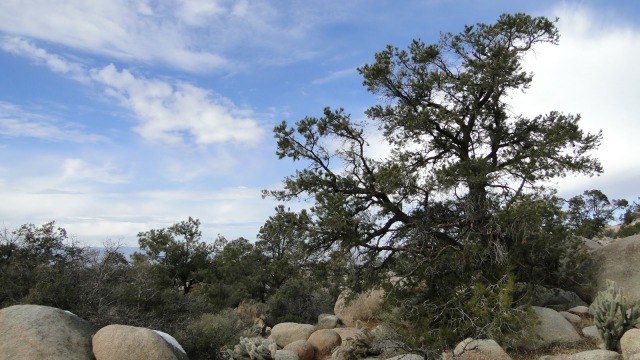 Hiking on New Year’s Day has become a tradition – albeit a fairly recent one. In 2011, I hiked the Mishe Mokwa Trail to the summit of Boney Mountain. In 2012, I hiked Palomar Mountain for the first time with Kelly. In 2013, I chose to kick off the new year with a hike at Whale Peak. This hike turned out to be far more difficult than I anticipated, although it also proved to be far more rewarding.

Whale Peak is a very remote hiking spot, and it has the pros and cons of everything that comes with solitude. Just getting to a reasonable spot to start the hike is an adventure. I took my poor little Civic over 4 miles of bumpy, sandy, poorly-maintained dirt roads until I came to a spot in the road where only a tank could have passed. From there, it was a 2.5 mile hike just to get to the trailhead, although this stretch of silent, snow-shrouded desert was anything but a drag. 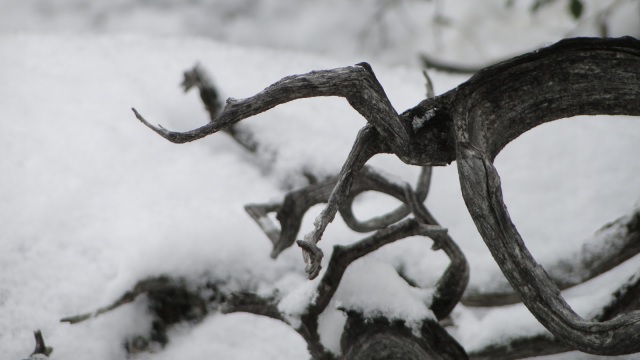 Yes, there was a fair amount of snow on the north slopes of Whale Peak today. The presence of the white stuff turned out to be a blessing. Not only was it just a dusting that added some detail and highlight to the landscape; it also helped me to find my way there and back over the many stretches of sketchy, almost non-existent trail.

There is no officially-maintained trail to the top of Whale Peak. What you will find are stretches of well-marked trail that are punctuated by steep, rocky scrambles marked only with small rock piles. These rock piles are very easy to miss at times, partly because rock is everywhere here, and there were a number of times where I lost my way, only to have to backtrack and sniff out the trail. 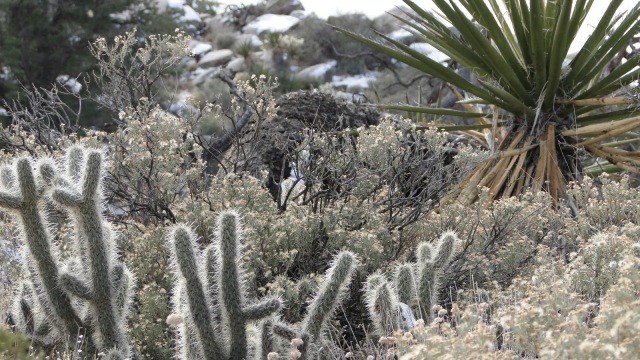 The trail follows what turns out to be something of a staircase. The trail starts by climbing 400′ up a watercourse, where it then opens out onto a flat, grassy valley. The trail is really easy to follow in the valleys, but sooner or later there comes another steep, rocky hillside. These topographies alternate until – after what seems like hours – one reaches the last valley and finds the ridiculously steep summit of Whale Peak looming ahead.

It’s another long scramble until you finally reach the summit, which is marked by an iron plate that was brought up by a Boy Scout Troop. From here, the panoramic view reveals a nearly endless desert, punctuated by soaring peaks and the Salton Sea. The mountains of the Peninsular Ranges – Lagunas, Volcan, Palomar, Santa Rosas, and San Jacintos – are all easily discernible, not to mention topped with snow. Today wasn’t a particularly clear day, and since the sky was overcast there was very little contrast to throw the landscape into relief. However, I could see for 100 miles in any direction all the same. The view is transfixing.

This habitat is here due to the north facing slope and the elevation, which creates enough precipitation to support a thriving habitat of pinyon pines, junipers, nolina, manzanita, agave, cholla, and scrub oak. Mix in a few grassy valleys, a wilderness of granite boulders, and a dusting of snow, and I found this topography to be among the most interesting and enchanting of any place in Southern California. Desert, mountain, and forest are all mixed together here, and the variety inspires the scenery.

Finally, I made my way back to my car, drove over the dusty road, headed back over the mountains, and home through a cavalcade of RV’s and trailers. This hike proved to be an odyssey, and given everything it took to get there, a rich, satisfying odyssey was the perfect way to start a new year.