Garnet Peak is one of the many peaks that thrust out from the eastern edge of the Laguna Plateau. While it is not the highest, it has one of the most commanding views of the desert country of Southern California, including Anza-Borrego desert, Mts. San Gorgonio and San Jacinto, the Salton Sea, and northernmost Mexico.

Important: You will need an Adventure Pass

After I finished my loop around and through the meadow, I tossed my stuff back and in the car and headed up Sunrise Highway to my next stop: Garnet Peak. The short, moderate hike to the peak is easy enough to tack on to larger hikes, and the rewards are worth it, especially considering the view you get. The view is great during the afternoon, but this would really be spectacular at dawn when one could watch the sunrise over Anza-Borrego.

The trail starts at a somewhat inconspicuous pull-out on the highway. If you pay attention to the mile markers, you will notice that right around mile 27.8, you will find the correct pull-out. It is important to pay attention to these pull-outs since there are a few others that lead to a variety of other trails. After passing through a small grove of pine trees. You’ll see a lot of evidence of fire damage from the 2003 Cedar Fire, as well as another fire that burned through in 2002. Many of the pines and oaks are bleached, ghostly pillars standing in isolation in a sea of chaparral, which recovers much faster.
However, there are a number of trees making a modest comeback here, as evidenced by a small grove of shoulder-high pine trees. Also worth noting is a black oak recovery that gives a good demonstration of how well oaks adapt to fires. While the main pillar of the oak is burned and dead, new branches sprout up from the base of the tree, which will eventually overtake and consume the main pillar. In another 50 years, barring another catastrophic fire, these oaks will gnarled and bent due to the recovery process. Twisted, but with a lot of character.

After the trail crosses the PCT, it begins to wind up the north side of the peak on a fairly steep incline. It’s not long before a portion of the desert comes to view, and it’s also worth stopping and enjoying the views west toward Cuyamaca Rancho State Park, which was severely burned in 2003.

Finally, you reach a rocky peak. The footing here is a little dodgy, but there are a few good spots to stop and relax. While you do, enjoy the view of Anza-Borrego and see how many peaks you can spot. Be careful, though. This peak forms the top of an incredibly steep escarpment. You’ll be keenly aware of how far and how fast you could fall down the side of this peak. 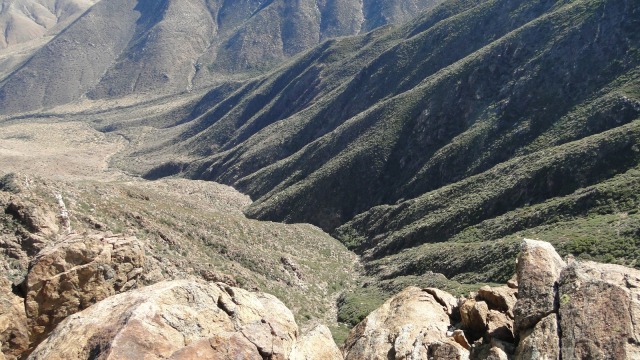 Once you’ve had your fill of the views, head on back and try driving up north to Julian, where you can reward yourself with a diabetes bomb such as hot dutch crumb apple pie with caramel sauce and vanilla ice cream.