Cinnamon Mountain lies within Gallatin National Forest and rises above the canyon as a bump that isn’t really any more distinct than most of the other bumps and ridges throughout the area. Seen on a topographic map, Cinnamon is the shape of a fin, which rises more or less prominently from the surrounding landscape.

While the mountain itself isn’t particularly memorable or photogenic, the views from the summit are, especially since Cinnamon Mountain is strategically positioned in the center of the Gallatin Mountains. From the summit, you can see virtually every peak and range, including Lone Mountain and Yellowstone National Park to the southeast.

I started out on the trail and was greeted with one of the most scenic stretches of trail I had yet experienced. The trail climbed gently from the trail head and immediately plunged into a grove of quaking aspen trees. On the ground beneath the trees and on surrounding meadows, wildflowers bloomed in profusion. Most Montana locals assured me that the wildflower season was pretty paltry by Montana standards, and if the show I saw was “paltry,” I really hope I get a chance to come here when the show is in fine form.

The trail crosses meadows and into patches of forest composed of Engelmann spruce, lodgepole pine, Douglas fir, and aspen. After a brief, shaded stretch of forest, the trail would again plunge into a meadow. This pattern repeated from start to finish on this trail, providing shade when the sun got too intense or space when the forest became too oppressive.  Again, wildflowers bloomed throughout, making the surrounding terrain gorgeous on many levels.

Eventually, the trail came to a four-way junction. I took the right turn, which led to the summit of Cinnamon Mountain. The trail switch-backed gently for the next mile and a half as the lodgepole, spruce, and Douglas fir disappeared and were replaced by Alpine Fir, whitebark pine, and limber pine.

The two species of pines were suffering from attacks by pine beetles similar to the bark beetles that periodically ravage the forests in Southern California. While the firs are unaffected, about half the pines were dead and dying. The effect was somewhat depressing, both in that the trees were dying and in that the dead trees would most likely provide fuel for future wildfires, much like the dead trees that helped fuel the 2003 Cedar Fire, which wiped out most of the forest in Cuyamaca and Julian.

However, there’s nothing the forest service can do aside from let the beetles take their course, fires or not. Eventually, given enough moisture, the forest will return to full health. And even at partial health, the forests in Montana are magnificent. The trees don’t grow to the same height as the ones in California, presumably due to the shorter growing season and because of the intensity of competition in Montana. However, the trees are dense, aromatic, profuse, and beautiful, and the Montana forests are amazing places to explore.

The trees soon thinned out, leaving large sloping meadows that were covered in yet more wildflowers. Also at this time, the surrounding mountains to the south came in to view. While these mountains don’t quite approach the stature and grandeur of the peaks on the Great Western Divide in the Sierras, they are nevertheless massive and picturesque. Numerous glacier carved crags rose into the distance, giving Cinnamon Mountain the feel of being an island surrounded in a sea of trees crashing against distance peaks and ranges.

After a little bit of huffing and puffing, I finally reached the summit, which is marked by an old fire look-out tower. At the tower, the views open up in 360 degrees, further reinforcing the island in the sky sensation and driving home the reasoning behind calling this area “Big Sky Country.”

As I sat on the summit enjoying my PB sandwich and cookies, I watched as a small patch of clouds expanded and rose before my eyes. It was time for the daily round of afternoon thunderstorms. So far on the trip, these thunderstorms had passed us by. However, the rapidly growing T-Cell appeared to be on a course to head directly over the mountain. And as any mountain climber knows, the last place you ever want to be in a thunderstorm is on top of a mountain.

With rain and lightning looming, I high-tailed it down from the summit and back to the junction. I turned back and began hustling toward the trail-head. I managed to stay one step ahead of the storm, while enjoying the softened, diffused light created by the sudden cloud cover. Thunder echoed and rolled across the narrow valley I was walking through, and just as I reached the trail head, the sky began to open up. I stepped into the car just in time as the first fat drops began splattering across my windshield. 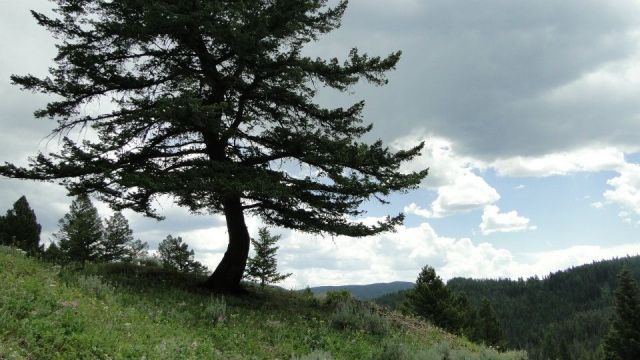 This hike is a great way to get an idea of what the mountain country in Montana looks like. Likewise, since this region supports roughly the same forest pattern as the Rocky Mountains, it provides a nice contrast to the forests of the Sierras.  Rocky Mountain forest grows denser, thicker, and more expansively. The ground cover of grasses, bushes, and wildflowers far surpass the typical Sierran groundcover of manzanita and chinquiapin. However, the trees in the Sierra, which are more widely spaced, reach a much larger stature, culminating in the giant Sequoias.  The classic Rocky alpine trees are symmetrical, spire-shaped firs, while in the Sierras the alpine trees are twisted, contorted lodgepole and foxtail pines. Many contrasts, and yet many similarities.
July: 22.1 Miles
Year-to-Date: 776.5 Miles