Cons:
– Close to Lodgepole Campground, which is a noisy madhouse 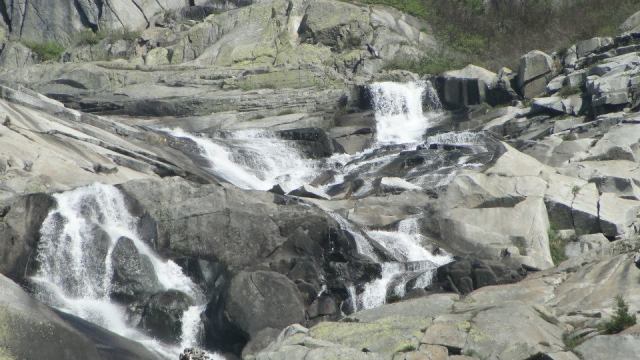 Tokopah Falls is one of the landmark trails in Sequoia National Park. The trailhead is located within Lodgepole Campground in the village of Lodgepole. Lodgepole is something of a hub within the park. There’s a general store, a post office, a ranger station, showers, a massive campground, and ranger facilities. There’s also the nearby Wuksachi Lodge, which is convenient for those who wants to walk in the woods and come back to a glass of wine, a shower, and cable television. To each his or her own, I say. 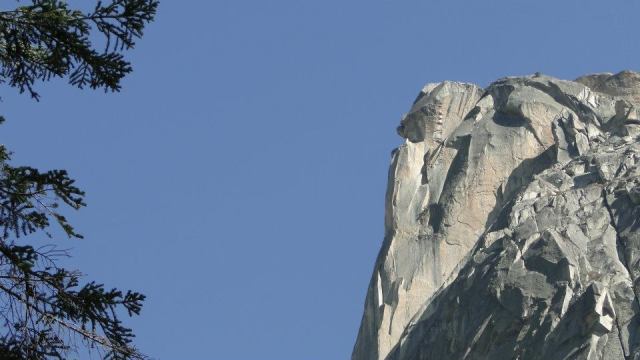 Those facilities are inevitable in a park as popular as Sequoia. And while it does not approach the scale reached in Yosemite, the village is a crowded, noisy place that does detract somewhat from the pristine beauty of the park. However, like most places in Sequoia, walk a half a mile, and watch the crowds disappear.

Tokopah Valley itself is a miniature version of the glacial valleys for which the Sierra Nevadas, Yosemite Valley in particular, are famous. In brief, a glacial valley is formed when a glacier gouges a massive, u-shaped gorge in the earth. As the glacier grows and advances, it shears away cliff sides and carries the rubble away. As the eons go by, the glaciers shrink and recede, leaving granite boulders strewn across long, u-shaped valleys. The U-shape is key, since most river canyons (Zion is a notable exception), are V-shaped, as the river cuts through the earth’s surface like a very blunt knife. 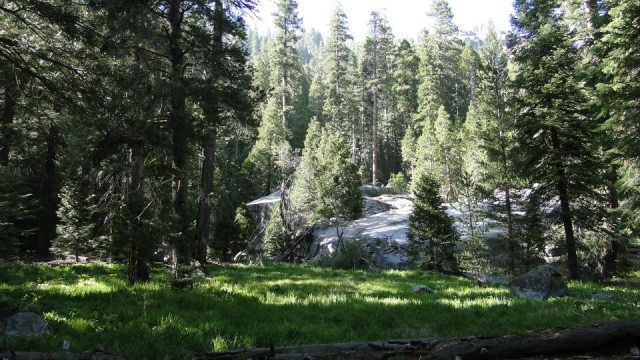 Thousands and thousands of years later, the forest moves in and covers the floor and lowest slopes of the valley. Up above, precipitous cliffs with often fantastic shapes tower overhead, creating a sensation of awe and wonder that led naturalists like John Muir to have massive verbal and written orgasms about the glories of nature. It is valleys like this and Yosemite as much as the big trees and geysers of Yellowstone that led to the conservation movement that spawned the National Park system.

The trail into the valley begins in the sprawling Lodgepole Campground. For the first half mile, you walk opposite a number of campsites. Families play in the river below in spite of the “deadly river” signs that warn of imminent peril for swimming in a swift river that is essentially snow melt from the highest elevations. This river drains much of the high country in a generous section of the Great Western Divide, and so this water is icy cold.

However, a half-mile in and the crowds and noise vanish. More of the same glorious forest blankets the valley’s floor, and you wander peacefully through the woods. Granite boulders deposited by retreating glaciers break up the shade of the forest, and much enjoyment is gained by walking out onto boulders that offer perspective on the valley’s walls, which grow higher and higher as you progress. The river provides a continuous drone of white noise as a constant accompaniment. The river is almost always in view, and occasionally, the trail comes upon openings that reveal gorgeous scenes of mountains towering over trees that tower over the swift-flowing rapids. 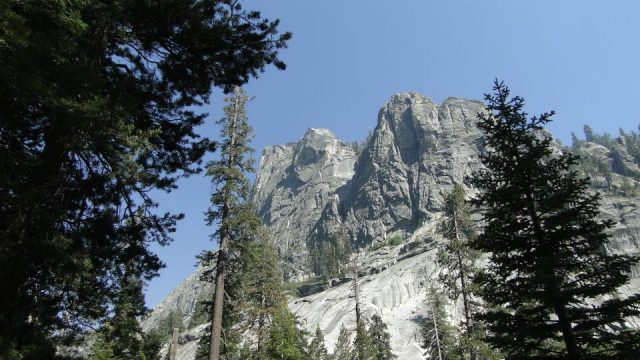 As the trail nears the end of the valley, the trees begin to thin, and the a broad amphitheater appears. Tokopah Falls cascades 1,000 feet from another glacial valley above Tokopah Valley. The scene doesn’t exactly rival the massive falls for which Yosemite is so famous, but it’s a beautiful place in its own right. 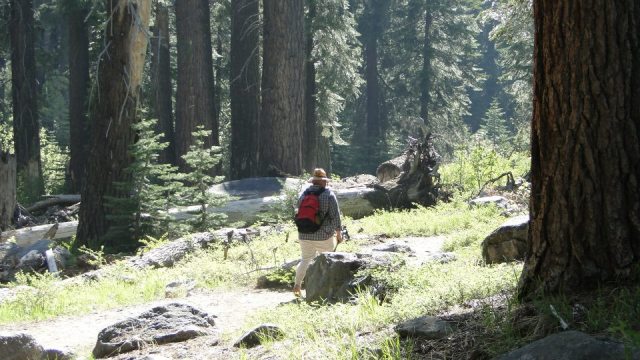 During the hike, Sean decided that he would try something a little different. A friend of his swears by barefoot hiking, and Sean, who suffers from arthritis in his knees, decided to give it a try. Taylor followed suit, and I figured, why not, and I also took off my shoes. I made it about 100 yards before quickly deciding that this wasn’t for me. Afterall, I walk 30 miles per week much of the time, and no part of my body ever aches for more than a day. Taylor seemed to have less trouble with it, and he kept his shoes off for the remainder of the hike. For Sean, however, it was a revelation. The pain in his knees left, and he wound up practically bouncing his way through the rest of the trail.

Do a google search on barefoot hiking, and you’ll come across a number of helpful instructional sites intended to turn you on to the benefits and techniques of walking barefoot. This makes a certain amount of sense, considering that the first tools of mankind were not, in fact, a pair of six-inch stiletto heals (which probably would have been more useful killing game). Mankind probably walked barefoot for most of history, and it’s not for me to dispute or endorse barefoot hiking. In fact, it probably is more healthy, and I know that I am usually happier without shoes on. However, I’m more inclined to take the “whatever works” approach. Sean’s knees felt better, so, in his case, those hiking boots should get 86’d. Afterall, what’s good enough for marmots. . .

Tokopah Valley, along with the Congress Trail, is a great introduction to Sequoia National Park. It is easy, readily scenic, and the investment is low. It’s definitely not the greatest hike, but it is certainly no slouch. In fact, some of my favorite hikes have taken place here – including a notorious snowy death march, which Sean and I undertook a few years back. In fact, this hike was also fun for remembering what it was like falling through the snow every ten feet and not being able to see the trail below us. 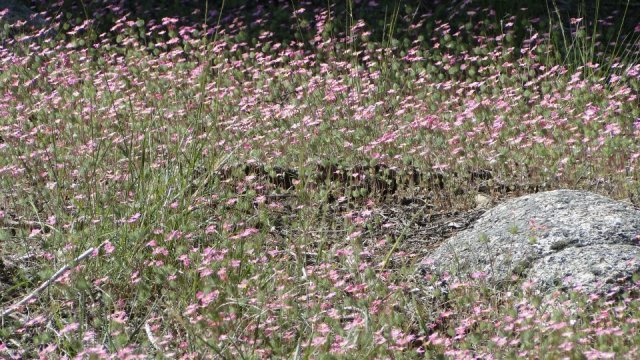