Pros:
– Stunning scenery from the beach, the transition from beach to redwood forest, and a deep, old-growth redwood forest
– Solitude throughout the middle stretches

I wanted something different. I was tired of the bushes and the views. It’s not that there’s anything wrong with any of the SoCal scenery; it’s just that it doesn’t scratch a particular itch, that being the forest. Forests are essentially what really got me into hiking. I used to drive hundreds of miles to Sequoia National Park just to spend a few hours wandering around Giant Forest. It was almost ritualistic in regularity that I would drive up late in the night, wander around in the early morning, then head back at some point in the afternoon. This happened at least once a year for many years before my ambitions got a little deeper.

It’s always the forest that my desires turn to at a certain point in hiking. I seek it out in Southern California and find some good examples at Palomar, Santa Anita Canyon, and in little stretches here and there in various other spots. I know there’s a lot more to be found as the summer rolls around and I can get up into the higher elevations. But however lovely those places are, nothing ever comes close to the Sequoias.

Most of my experience is with the giant Sequoias, or sequoia giganteum, the massive tree billed as the largest living thing (determined by volume). This tree lives up in the Sierras, and I’ll have a lot more to say about it sooner or later. I have less experience with its cousin, the redwood (sequoia sempervirens). My experience was limited to what I’ve seen at Muir Woods and Big Sur, and those specimens and locales, while beautiful and deserving of their fame, do somewhat pale in comparison to the Sequoia or even to the massive specimens far to the north.

Big Basin, however, was a place that I had heard about, but had never visited. I didn’t know much about the park, but when my planned trip to the Grand Canyon was aborted due to the inability to get a permit (apply early), I turned to other alternatives. The mountains were still too cold and logged with snow for backpacking, and the desert has too little water. My best alternative therefore, turned out to be Big Basin.

Big Basin features many wonders, including 300 foot trees, waterfalls, a beach, stunning views, and dense forests. One of the big attractions here is the Skyline to the Sea Trail, which stretches 34 miles from Castle Rock State Park, through Big Basin, through the Waddell Creek State Wilderness, where it finally terminates at Waddell Creek State Beach. I didn’t have the time or the resources to hike the entire trail; this requires a point-to-point route with a ride from the beach back to Castle Rock, which I did not have. Instead, I elected to hike up to the park from the beach, camp for a few nights, and hike back. This blog describes the first and last leg of the hike. The rest of my hiking at Big Basin, which includes the Berry Creek Falls Loop, the Sempervirens Falls Loop, and Buzzard’s Roost, will be covered in the next blog. 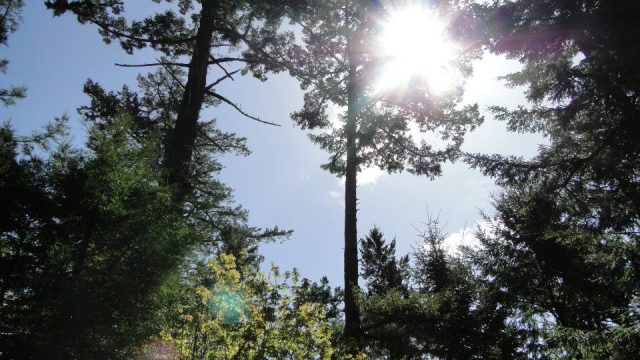 I left L.A. at 4:00 in the morning to head up to Big Basin, which is located an 30 minutes north of Santa Cruz. Along the way, I received this amusing shout-out from my friend Adam, who does a morning radio show on a central coast radio station. I arrived at Waddell Creek State Beach, and after a half-hour’s walking around to find a park ranger, I parked the car, strapped on the pack, and headed in.

The trail gains a little bit of altitude, which opens up a great view of a small, marshy valley carved out by Waddell Creek. Moss-draped knobcone pines and Douglas firs (the much larger brother of the SoCal native bigcone Douglas fir, which is distinguished only by larger cone and smaller size) tower over the trail, which begins a gentle ascent into the low, but heavily vegetated Santa Cruz Mountains.

Along the way, the trail passes through grassy, wildflower-carpeted bay and oak groves, an alder-lined creek, atractrive trail camps that were still closed for the season, until it finally emerges onto patchy stands of redwood, which compete for sunlight with the almost equally large Douglas fir. It’s worth noting that the tallest recorded Douglas fir is actually the second tallest conifer ever recorded (393 feet), taller than the current tallest redwood (the Hyperion Tree, which stands at 379 feet). In other words, the Douglas fir is nearly equal to the redwood, although the redwood remains more famous due to numerous properties (which I’ll get into later) in addition to the redwood’s more appealing coloration.

From the point where the wide multi-use Skyline Trail becomes a single track closed to bikers and equestrians, the experience is nothing short of magnificent. It is in comparison to Big Basin that the name Muir Woods (with emphasis on ‘woods’) becomes apt: Big Basin is a massive forest – the largest in the southern range of the redwood.

The trail proceeds mostly north along Waddell Creek until it reaches the heart of the forest at Berry Creek Falls (more on that later). At this point, severl trails junction, but it is the depth and beauty of the forest, which is at its lushest and most vibrant, that makes this segment so special. Again, I’ll discuss this stretch in more detail when I get into the Berry Creek Falls Loop in the next blog. Suffice it to say, this is some of the most beautiful hiking I’ve done, and it rivals (but doesn’t quite match) Giant Forest in the Sierras. To be fair, no forest will ever match that one. Giant Forest is beyond comparison to me.

However, this wasn’t a leisurely stroll in the woods. I had 40 lbs of camping gear on my back, and as such, I couldn’t enjoy this hike quite as much as it was meant to be enjoyed. This hike was a lot of work, specifically where Skyline climbed the ridge that divides the western portion of the park from the more developed eastern portion. I sweated my way through this one, barely stopping for pictures and hoping just to make it. All of the training I did earlier in January to March really paid off here. Each mile with a pack feels like two, especially uphill, and this was every bit a marathon.

The return trip was easier and more scenic, even though my battery was almost dead. I managed to snap a few pics when the light became really beautiful. With less weight on my back, I made it back faster. However, the return trip was still no picnic.

Finally, I have to give another huge burst of gratitude to Jenny and Brad. Jenny is an old high school friend who lives in Oakland. She and her boyfriend Brad drove up to meet me for the evening, even though they didn’t stay the night. With them, they brought more firewood than I could burn, delicious fresh fruits, guacamole, guitars, and some really enjoyable company. For those who backpack, it should be well understood that the unexpected luxuries of fresh food and firewood, both of which are too heavy to carry, are pleasures multiplied tenfold from the norm. I thoroughly enjoyed these luxuries, and I’m still grateful to both.