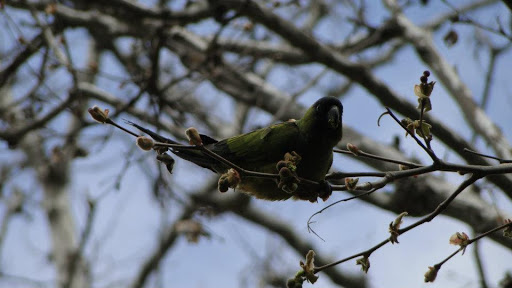 Pros:
– Experiences every ecosystem in the Santa Monicas, excluding valley oak woodlands.
– Expansive views of the Santa Monica Mountains, the San Fernando Valley, the Oxnard Plain, the Channel Islands, the Conejo Valley, and, when it’s clear, Palos Verdes.
– Close-up looks at volcanic rock formations on Boney Mountain
– A trip through gorgeous Serrano Canyon and Serrano Valley
– A return trip through the wide-open savannah of Sycamore Canyon

Cons:
– Aside from the ache in my legs, none.

Boney Mountain lies on the western end of the Santa Monica Mountain range. The western shoulders and knees of the mountain lie within Point Mugu State Park while the bulk of the mountain lies within the Boney Mountain State Wilderness. Boney gets points simply for having its own designated wilderness area, which means it is closed to everything other than foot traffic. It is accessible from several different trails: in the north from the Wendy trailhead; from the west at the Old Boney Trails and Chamberlain Trails, and from the east at the Mishe Mokwa/Backbone trailhead.

As mountains go, Boney is not particularly tall. The summit on Sandstone Peak sits at 3,111 feet above sea level. However, it does rise almost directly from the sea, which makes it the only hike in the Santa Monicas in which you can gain over 3,000 feet. Two qualities make Boney remarkable: it’s volcanic rock formations, and its dramatic appearance.

Boney isn’t so much a mountain as it is a plateau. Atop that plateau, numerous dramatic volcanic rock formations sprout up in fantastic shapes. One looms like a sentinel. One rises up from the chaparral like an enormous stone ship floating on a sea of green. Hulking piles of rock hide caves, slots, and crevices that one could take an hour exploring. 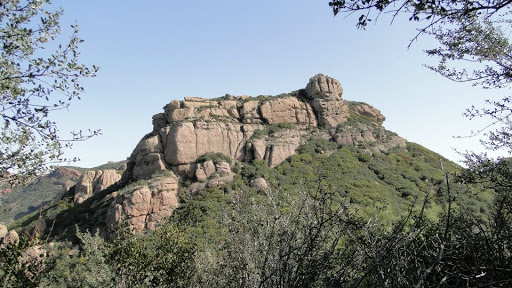 As a landmark, Boney looms large over Ventura County, its jagged spires and outcrops brooding over the Oxnard plain and dominating the skyline in the Conejo Valley. It is omnipresent, and its shape is so distinctive that it continually draws my eyes toward it, begging me to climb it. 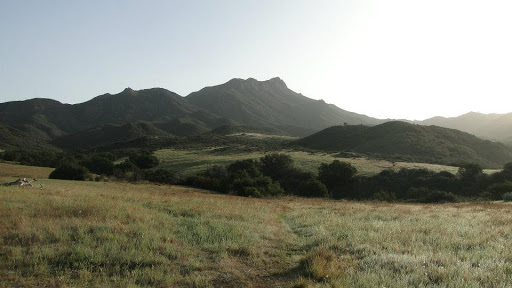 I’ve been taking shots at Boney for years. Originally, I would follow the Old Boney Trail to the Danielson Monument site, where an unofficial and unmaintained trail ascends a torturous and treacherous route up to what I thought was Boney Mountain but later learned was simply one of the three peaks collectively known as Tri-Peaks. It wasn’t until just recently that I learned that the entire plateau is Boney Mountain. The various peaks represent different notable parts of the mountain, but they are not actually separate.

I’ve reached the summit at Sandstone Peak too many times to count after hiking the Mishe Mokwa Trail numerous times over the year. However, I don’t consider that a true ascent, since you start out about 900 feet below the summit. The main hike that has been on my to-do list is this one – a 22 mile hike from Sycamore Cove that crosses through some of the most beautiful parts of of Point Mugu State Park.

The trail begins at Sycamore Cove and passes through the popular Sycamore Canyon campground. During the late Spring, Summer, and Autumn, it is next to impossible to get a site at this campground, yet on this day it was completely empty. Once you pass the trailhead for the Big Sycamore Canyon fire road, it’s an easy 1.1 mile segment along flat, well-maintained fire road before you come to the junction for Serrano Canyon and Valley. 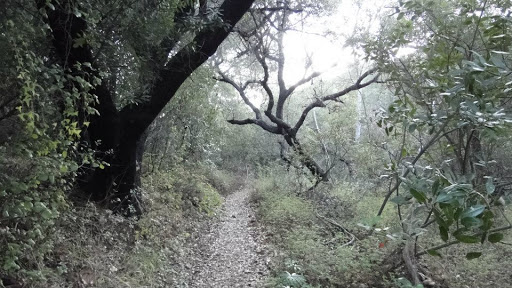 I’ve been to Serrano before – as recently as this January, and somehow I don’t recall it ever being as gorgeous as it was today. Water trickled in the canyon as the sun crept over the surrounding hills. Birds sang in the sycamores, all of which supported tender new buds and leaves. Myriad varieties of wildflowers bloomed and green grasses shimmered with dew. 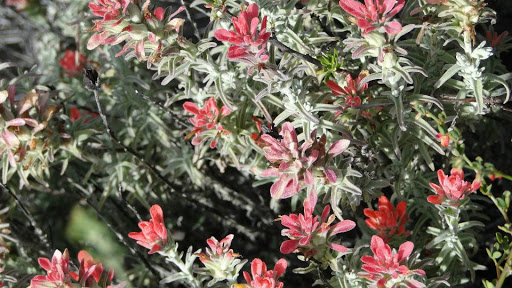 The canyon meanders gently upward for 2.7 miles before it opens up into the broad grassland of Serrano Valley. The grass was still green there in spite of scant precipitation. Boney Mountain stands silently above the valley as the first rays of the rising sun strike its southern flank. A ribbon of riparian vegetation indicates the stream that crosses the valley and empties into the canyon.

Serrano is more than worthy as a destination for an out and back hike. It is more comely than its larger and more accessible cousin, La Jolla Valley, even though La Jolla is definitely worth a visit. It was with a fair amount of regret that I had to continue across it toward the true destination. It prompts some reflection on the tendency to do so many long hikes lately. It is brilliant to rack up the miles this way, and I’ve enjoyed the accomplishments. However, the shorter hikes can be more enjoyable simply because there is no agenda, and if you find something beautiful, you can sit with it for as long as you like. Not so with a 20+ mile hike.

The trail takes you across the western end of the valley and gently ascends to a ridge that affords a hawk’s eye view the valley as it descends further below you. This ridge continues upward until it junctions with the Backbone Trail, which returns to Sycamore Canyon as the Old Boney Trail or continues upward, eventually becoming the Chamberlain Trail.

The Chamberlain Trail was named after a guy named Henry Chamberlain, and there is a plaque dedicated to him that sits on a split volcanic rock. I don’t know what Henry did or whether it deserves a plaque, but the rock is a good spot for a breather since the trail starts getting pretty steep at this point. The trail winds up, over, and around a ridge that leads up to the southwestern corner of Boney. At times, there are great views of Sycamore Canyon, Serrano Valley, and the ocean. At other times, chaparral blocks the view. At these points, the trail can become a fairly tedious climb, and I am pretty sure I fell into some kind of trance and lost track of my thoughts for a good fifteen minutes. It felt curiously like being asleep while moving at the same time.

All of the effort is worth it though. After what seems like an eternity (and this is only 8.5 miles into the hike), the trail levels out, and you begin to cross the Boney Plateau from west to east. At this point, you pass between two massive rock formations, which gives the trail the effect of crossing into a new world. In essence, you are, since from here to Sandstone Peak, you lose site of the ocean and the surrounding valleys and canyons, and your main companions are the numerous rock formations that stud the top of the mountain. This portion of the trail is accessible via the Mishe Mokwa Trail, a moderate 6-mile loop that is a much more palatable alternative for anybody who wants to explore Boney but doesn’t have my masochistic streak. 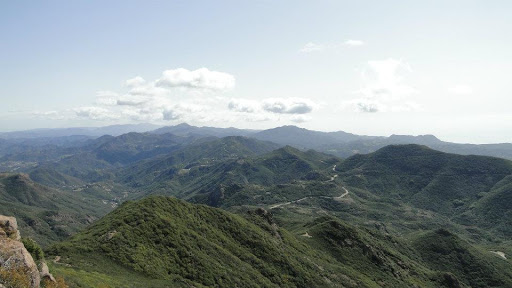 The trail eventually reaches Sandstone Peak (or Mt. Allen if you’re a Boyscout) after crossing through a broad field of outcrops and chaparral that includes ever-wider views of the surrounding suburban and metro areas. Sandstone Peak features the best views on the entire trail, which gives this destination way more value than simply “the point at which you turn around.” One thing Boney has over its much larger cousins in the San Gabriel, San Bernadino, and Peninsular Ranges is that only Boney has an unimpeded view of the ocean. It’s a spectacular view, at that. 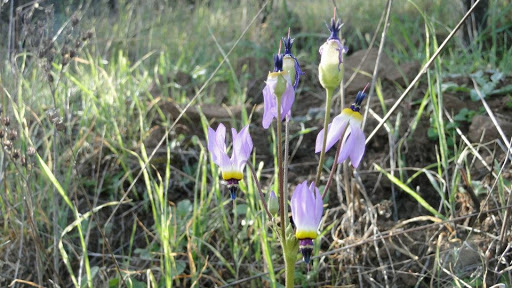 At 10.8 miles, it is time to turn around and go back at a point when most people have already finished up and began driving home. I passed the next 7 or so miles in one long, fluid day-dream, stopping occasionally to stretch my legs. The views remained exceptional, and the experience was improved by a new perspective, but at a certain point, I just became lost in my own thought cycle and paid minimum attention to what I was doing. It was a very enjoyable experience – not exactly trance-like, but I had definitely left the normal waking thought patterns and experiences far behind and was experiencing something a little different.

Instead of returning the way I came at the junction for Serrano Valley, I instead followed the Old Boney Trail down to Sycamore Canyon. I figured that it would be a nice change to enjoy the flat, expansive grasslands and the towering sycamores. The grass is still green there, and many of the sycamores are sporting their new leaves. Feral parrots screeched overhead, and two mule deer gave themselves away by crunching through a huge pile of dead leaves. The sun shone sporadically through the clouds. One minute it was overcast; the next, the trees stood bathed in sun, contrasted against the deep gray of the cloud cover.

Finally, with my knees aching and my muscles protesting, I climbed into my car and removed everything except my shirt and pants. This trail featured the finest that the Santa Monicas have to offer. It crossed a wide, grassy valley and a narrow, riparian canyon. It climbed the shoulders of a mountain, plunged into the deep gloom of an elfin chaparral forest, emerged on a sunny plateau, and wound through a maze of volcanic boulders, culminating in the best view in the entire Santa Monica Mountain region. It descended into a broad savannah studded by sycamores and oaks, and it ended at a sun-drenched beach with gentle surf and turquoise water. All the while, a cool sea breeze kept me from sweating or overheating, and the views kept me moving and engaged.

I may never do this particular hike again, mainly because there are too many other big fish to fillet and fry. However, I’m glad I finally accomplished this one, and I know I will always come back to portions of it since Pt. Mugu remains my favorite state park, and, so far, Boney remains my favorite mountain. 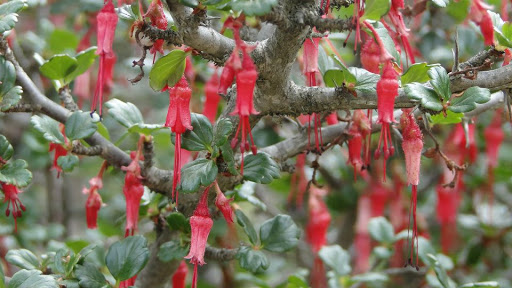 Oh, and this was stuck in my head for nearly the entire hike: