About half-way up the east flank of Mt. San Bernadino lies a flat stretch of terrain coated in manzanita, dotted with Jeffrey pines, and, on this day at least, frosted with 6 inches of snow. The flat itself is a good stop and rest point for a longer trek up to San Bernadino Peak, or, on a day in which you are unprepared for more than 6 inches snow, a satisfying turn-around.

Note: You will need an Adventure Pass to park at the trail head. You will also need a wilderness permit to enter the San Gorgonio Wilderness, although good luck getting one of those with the government shutdown.

Mt. San Bernadino has been on my radar for a long time. Last year, I was determined to complete the “Six-pack of peaks,” which includes Mt. Wilson, Cucamonga Peak, Mt. Baldy, Mt. San Bernadino, Mt. San Jacinto, and Mt. San Gorgonio. I’ve summitted all of those peaks except this one, and I’ve been eager to cross it off the list. In addition, others have described it as a great summitting experience, and so the peak has been in the back of my mind for some time. 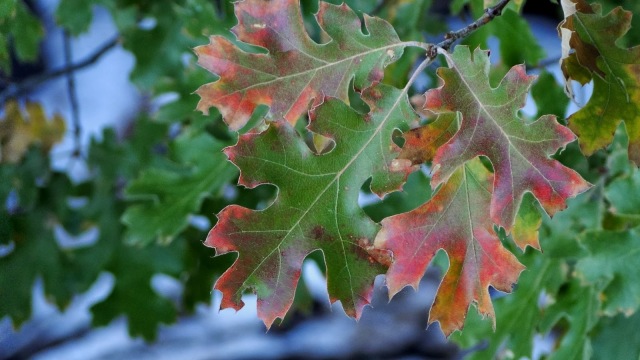 It wasn’t going to happen today, though. Wednesday’s unseasonably cold storm dumped anywhere from 6-12 inches of snow at the elevations above 8,000′. Had I thought to bring my snowshoes and a snow jacket, and had I an entire day, it’s conceivable that I might have summitted the peak. However, I had none of those things, and so I contented myself with going just past halfway to get to the summit. This alone was a worthy trek, but I’ll acknowledge that I’m still burning to get up top. 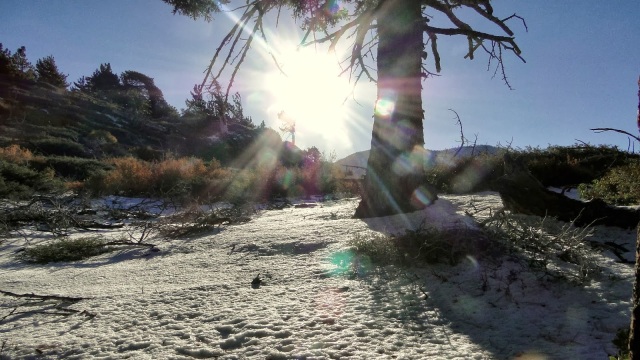 The hike sets off from Angelus Oaks, which is so named for an abundance of black oaks. Many of these oaks were starting to turn. While their bright orange does not compare with the aspens of last week, this is still a solid example of fall color in Southern California. You want fall color? Hang out around Big Bear during the next couple of weeks, and you’ll get plenty. There was snow on the ground at the trail head, which tempered my expectations on the hike from the get-go. I resolved to go until I was no longer comfortable, at which point I would turn back. There’s little joy in trudging through calf- or knee-high snow up a massive mountain. 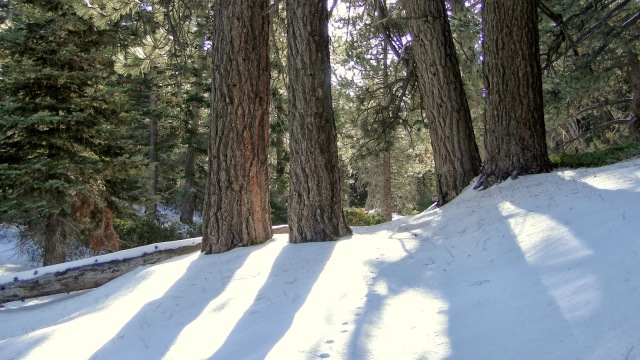 However, there is plenty of joy when the snow doesn’t go past your ankles. And so I wound my way up the flank of the mountain, switchbacking through mixed-conifer and black oak forest. The world was quiet and peaceful, and I found myself grateful to be in the world, rather than on it for a while.

A word about the Wilderness. I committed a crime today. I entered a protected wilderness without a permit. However, I was unable to get the appropriate permit because the Forest Service was unable to process the permit. The Forest Service would not process the permit because that branch of the government is currently closed. The Forest Service functions as a steward of public lands that are collectively owned by the people of the United States, by way of the people’s government, which, in theory, is designed to do the will of the people.

As I trespassed, I had some concern that a ranger (furloughed, though still performing duties), might give me a citation or escort me out of the wilderness. So, a public official appointed by a government body designed to protect the resources of the people might kick me off of the resource, of which I support through taxes, even though the government gave me no recourse to secure permission through the normal channels. And he would do so because he or she would still be obligated to fulfill his or her function, even though the government, which my and your taxes fund, were withholding his or her wages.

While I am aware of multiple over-simplifications, here is the essence of the absurdity created by this shutdown. I continue to pay taxes that fund an organization that is not running and which would issue a citation for my attempt to utilize a public resource that is unavailable because that organization is not being funded. What am I paying for? Am I paying for the government to deny me access to what my tax dollars pay for? All because a faction of the government refuses to resolve differences in the way it was supposed to do?

Anyhow, wah wah wah. This was still a great hike, legal or illegal. I’ll come back one day (with the appropriate permit), and I’ll summit. For today, it was a great early romp in the snow and through the woods.