Kearsarge Pass is one of a number of points where trails cross over the Sierra Crest, which runs as a spine along the east side of the Sierra Nevadas. The trail leading up from Onion Valley crosses over the crest into Kearsarge Basin, where a network of lakes ultimately gives way to one of the two major canyons in Kings Canyon National Park.

I knew I had one more solid hike in me, in spite of a lack of sleep and a lot of driving around. After wrapping up the Methuselah Walk, I debated my two options: Big Pine Canyon or Onion Valley. I had a mind to get up above treeline and see some views, and so I opted to go to Onion Valley and take the trail up to Kearsarge Pass, which stands at approximately 11,760′. 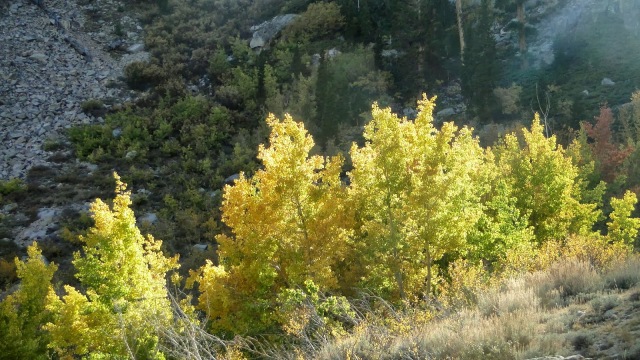 The trail starts in circular Onion Valley. I don’t know why it’s called Onion Valley, as there are no onions and it doesn’t reveal a lot of unforeseen layers. However, there were a lot more aspens turning, as well as a campground and two separate trail heads leading to lakes, lakes, and more lakes. It’s a long drive to get up here, and the altitude at the trail head is already pretty high at 9,200′. Good for acclimating.

Fortunately, I was already pretty well acclimated after spending the previous night at 8,500′. This helped as the trail immediately begins climbing and never really stops. There are a couple of flat stretches alongside the lakes leading up to the pass, but these stretches are brief respites in an otherwise consistent climb. Fortunately, the trail is well-engineered, and the switchbacks are rarely ever steep.

After crossing over the first moraine into a forest of foxtail, whitebark, limber, and lodgepole pines, the trail reaches the first of four separate lakes. These lakes lie in basins created by advancing and retreating glaciers over hundreds of thousands of years. Each time a glacier advanced, it left a large pile of rocks at its terminus, which are known as terminal moraines. These moraines act as dams, creating scenic and serene alpine lakes. 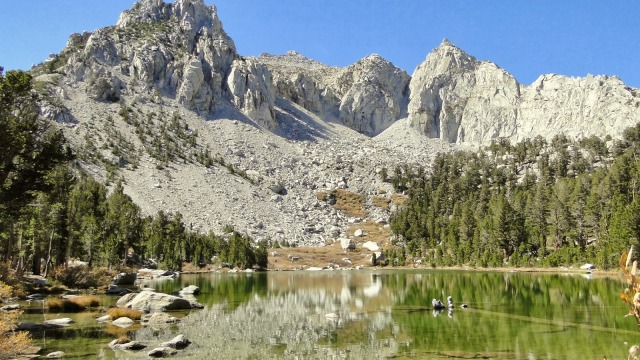 Each moraine and lake gives way to another moraine and lake in what eventually resembles a staircase leading higher and higher until the crest, at which point the mountains start heading gradually down, in this case to the bottom of Kings Canyon. As the altitude gets higher, the lakes get starker. The final lake before the crest, Pothole Lake, was a shimmering, deep blue pool in a bowl of granite. 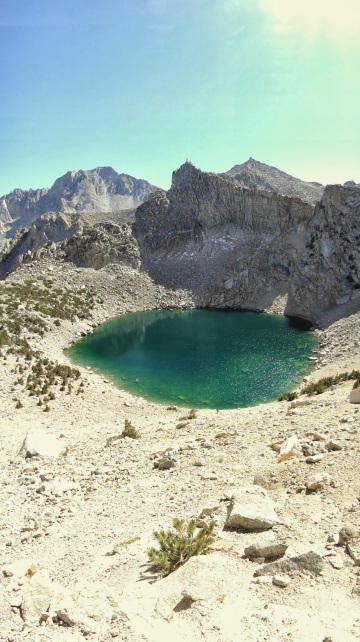 About a mile before the crest, the trees thin out or turn to shrubs. Above are the towering granite peaks that characterize this side of the range. The sun beats down hard in the thin atmosphere, and each step is a little more challenging as the atmosphere now contains around 80-85% of the oxygen at sea level. The term “rarified” is apt here, not just to describe the atmosphere, but to describe the sublime views in all directions.

Due east, the Owens Valley shimmers 7,000′ below. Due west, the lakes in the Kearsarge Basin invited me to go further. North and south were huge peaks that likely reached 13,000′, perhaps even 14,000′. I wanted badly to go on and see the Rae Lakes, only 4-5 miles away, then continue on down Kings Canyon through Paradise Valley and back up along Bubbs Creek Canyon. However, this 40 mile odyssey will have to wait for another day, as I had to get back to San Diego.

This was a fine conclusion to two days of adventuring in the Eastern Sierras. Gorgeous colors, towering peaks, shimmering lakes, and endless views make this a spectacular place. It’s hard to say which side I like more. The eastern side is dramatic, even overwhelming. The west side is lush and full of variety. At any rate, the Sierras are one of the finest mountain ranges in the world, and we are all lucky for having them so close.