The name “San Onofre” is usually synonymous with a pair of suggestively-shaped nuclear reactors. However, this area also features miles of pristine coastline that, due to Camp Pendleton and the reactors, has been left undeveloped. This beach represents one of the last undeveloped stretches of coastline in the Los Angeles/Orange/San Diego County region.

Note: There is a $15 entrance fee for the State Park

I always associated San Onofre with “The Boobs,” which is what I, and probably most other people, call the nuclear facility just north of the state beach. I also associate it with being “almost to San Diego.” The open space that remains undeveloped due to the presence of Camp Pendleton represents a break in the nearly continuous urban sprawl from Los Angeles to Orange County. The open space was always a welcome sign on the long drive down to San Diego, but now I appreciate its value even more. 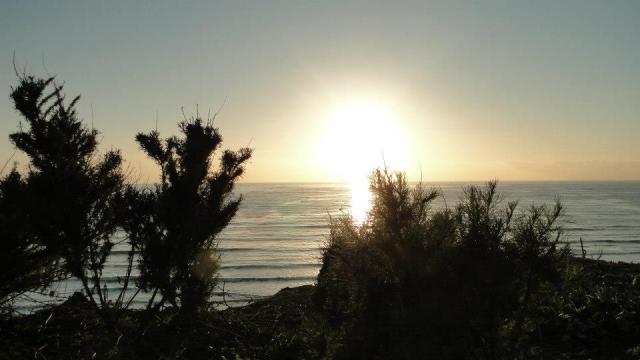 No doubt real estate developers have salivated over this stretch of land for decades. This land features the same ocean views/proximity as the property cash cows of Carlsbad, Encinitas, Del Mar, La Jolla, Huntington Beach, Newport Beach, etc. Should the military ever relinquish its grip on Camp Pendleton, the last undeveloped parcel of coastal land south of Ventura will probably cease to exist forever.

Not yet, however. This land, plus the beach, provide a reminder of what coastal Southern California once was: rolling hills clothed in coastal sage-scrub plant communities, soaring coastal cliffs, and endless beaches. This is exactly what you will find at San Onofre, and it is easy to imagine that all of civilization has melted away for a brief period of time, leaving only an almost endless coastline, crashing waves, towering sandstone cliffs, and circling birds. That is, if you keep your back to the nuclear plant.

Kelly and I enjoyed our 6.1 mile trek out-and-back on the beach today. We enjoyed a number of sites, including the aforementioned cliffs, waves, and birds, but also some modest tidepools featuring a scattering of mussels and anenomes. The tide was out, so we were able to walk fairly far out toward the waves, allowing us to enjoy walking along the water’s edge. If it’s possible, I recommend coming here during low tide. The beach is pretty rocky, but when the tide is out, there is a lot more sand.

Here’s hoping that this beach, and the land surrounding it, remain untouched and undisturbed for many years to come. With all of the development that has plagued coastal Southern California, it would be a shame to lose the last reminder of what the land once was. The real hope is that businesses recognize that this relict of California’s natural past is worth more, at least on a spiritual level, than the potential revenues from development. 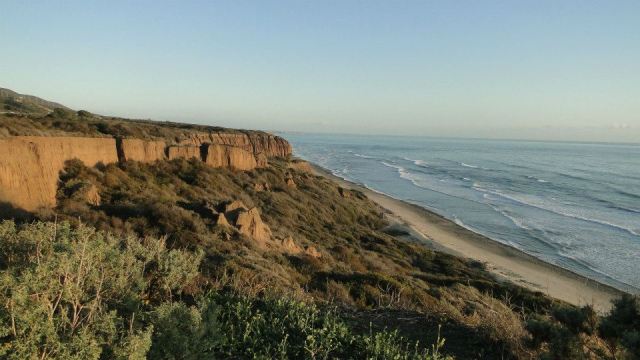